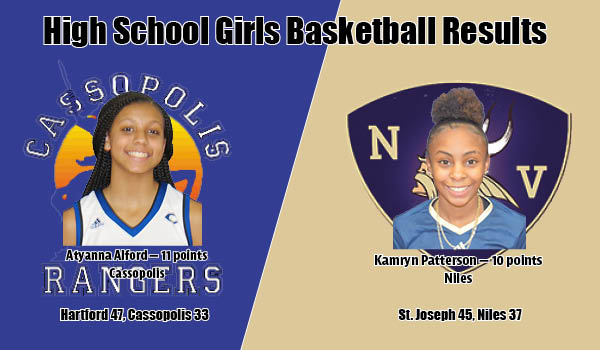 HARTFORD — Host Hartford turned a first-half deficit into a 14-point victory over Cassopolis as the Indians remained tied with Bloomingdale for the top spot in the Southwest 10 Conference girls basketball standings.

The Indians also outscored Cassopolis 9-6 in the final quarter.

Atyanna Alford led the Rangers with 11 points. She was the only Cassopolis player to reach double figures. The Rangers also got seven points from Ella Smith and six points from Zaniya Dodd.

The Rangers are back in action Friday night as they travel to Mendon for another Southwest 10 Conference contest.

After having played its first home game since mid-December Monday night, the Niles girls basketball team was back on the road against a familiar foe — former SMAC West Division opponent St. Joseph Tuesday night.

Niles cut into the first-quarter deficit, but was unable to overcome the early hole it dug for itself. The Vikings trailed 29-20 at halftime and 35-29 heading into the fourth quarter.

Cailynn Junk led St. Joseph and all scorers with 15 points.