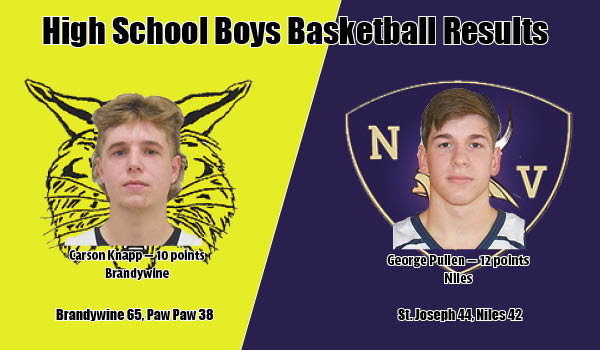 PAW PAW — There was no letdown for the visiting Brandywine boys basketball team Tuesday night.

Coming off a big win over No. 1-ranked New Buffalo last Friday night, the Bobcats traveled to winless Paw Paw for a non-conference game. In the opening quarter, Brandywine jumped on the Red Wolves 16-7 and rolled to a 64-38 victory.

The win improved Brandywine to 8-4 overall, while Paw Paw fell to 0-13 on the season.

Brandywine returns to BCS Athletic Conference Red Division play Friday night as it takes on host Berrien Springs. The Bobcats and Shamrocks are tied atop the division standings at 2-1.

With the 88-54 victory, Cassopolis improved to 7-4 overall and 7-2 in the Southwest 10, which leaves the Rangers, winners of six straight games, two games behind league-leading Centreville.

Cassopolis scored 20 or more points in each of the first three quarters, including 25 in the third quarter, which allowed the Rangers to take a 73-43 lead into the last eight minutes of play.

Davion Goins scored a game-high 24 points to lead Cassopolis, which also got 14 points from Daeton Gillam, 12 points from R.J. Drews and 11 points from Logan Pflug.

Kaden Johnson scored 23 points to lead the Indians, who are now 6-5 overall and 5-4 in the Southwest 10. Zach Truelove added 14 and Tanner Kinchen 10.

The Rangers continue league play Friday night as they travel to Mendon.

The loss was the sixth in the Vikings’ last seven games and leaves Niles with a 3-8 record.