Notre Dame remains undefeated at home with win over No. 3-ranked Wolfpack 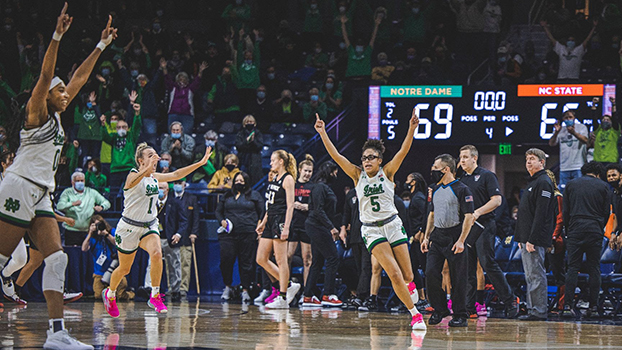 Notre Dame remained undefeated at home with a win over the No. 3-ranked Wolfpack. (Photo courtesy the University of Notre Dame)

As a result, the Irish remained undefeated at home, improving to 10-0.

The victory is the first win at home against a top-five team since Arike Ogunbowale and company knocked off Louisville in a No. 1 versus No. 2 matchup back in the 2018-19 season.

Maya Dodson led the way with an impressive 20-point, 10-rebound double-double, while keeping All-American Elissa Cunane at bay, who scored 13 points for the Wolfpack.

Westbeld, Brunelle and Miles all converted three-point plays in the first, while Dodson went 3-for-3 for six points to power the Irish. All-in-all, the Irish shot 7-of-19 compared to NC State’s 5-for-15 to garner a 17-13 lead.

Mabrey and Dodson scored the last pair of buckets for the Irish, handing the home team a 32-28 lead at the half. Dodson was the lone player in double figures with 10 points on 5-of-9 shooting. The Irish outrebounded the Wolfpack 28-18 in the first half, which led to a 10-2 second-chance points differential.

Dodson, Westbeld and Miles kicked off the third with a combined 10-2 scoring run, building the Irish lead to 12 at 42-30. However, the Wolfpack countered with a 12-5 scoring spree right over the next three minutes to cut the deficit to 47-41.

From there, Peoples lifted the Irish by scoring four of the team’s next five points, as the Irish ultimately took a 52-43 lead into the fourth quarter.

The fourth quarter featured big shots from several Irish. Dara Mabrey connected on a pivotal three in transition at 7:34 and then a layup through traffic at 5:16. Miles added a pair of jumpers in the paint while Dodson tacked on her 20th point of the game.

Yet the Wolfpack (19-3, 10-1) wouldn’t go away, cutting the Irish lead to five at 3:30 and then down to two at 1:42. Then it was Notre Dame’s two freshmen who came in clutch in the final 1:12, as both Citron and Miles hit four straight free throws to give the Irish 69-63 lead. NC State would have two attempts at three at the end of the game to tie, but the Irish defense stood tall for the top-3 victory.

The Fighting Irish look to #ProtectPurcell yet again and close out the four-game homestand Thursday against Virginia Tech. Tip is set for 8 p.m. on ACC Network.