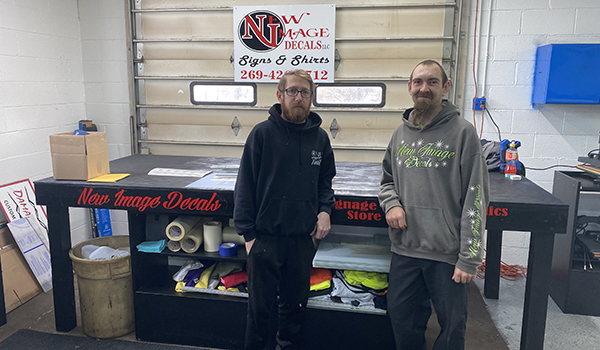 NILES — Those passing through downtown Niles might see newly minted designs in the windows of Jim’s Smokin’ Cafe and yoga studio Wrapped in Light, among others — and they all come from the same source.

Wayne Beaird is the owner of New Image Decals, a local graphic design business that has recently opened a new location on Detroit Road in Niles. Beaird began his career in graphic design after graduating high school, following through with his passion in art and computer-aided automotive design.

Originally working in another shop in South Bend, Beaird took the leap to open New Image Decals. The opening is another step in the business’ expansion. The new space allowed Beaird to work on a wide range of different projects, from smaller decals and signs for business to creating T-shirts and large-scale decals for windows and various kinds of vehicles.

Things were not always that simple for the up-and-coming business. When opening New Image, Beaird began printing and working on his designs out of his kitchen.

“There were many times I thought about shutting down because I didn’t think I was going to make it any further,” Beaird said. “Then all of my supporters would come out of nowhere and push me and tell me how good I’m doing, and really showing what I’m capable of.”

One such supporter was Matt Kremer, the owner of Only Tints Window Tinting, who has been a major supporter of Beaird’s since first meeting him in 2015. From doing sign work on the doors of his storefront to doing full decal work on Kremer’s car, Beaird was able to establish the initial connection that gave his business that initial launching-off point. Kremer opened up space for Beaird within one of his own locations in Niles, giving his friend the space he needed to build his passion.

“It’s great just to see his business grow,” Kremer said. “He helps me, and I help him as we are both trying to develop our businesses from the ground up.”

Beaird also gained support through his community, as he opened a GoFundMe campaign to help with expansion. Raising $270, the page has allowed Beaird to purchase new equipment such as a cutting table and workstation, as well as the money needed for signing to promote the business.

“[The crowdfunding] definitely showed me who the real supporters were,” Beaird said. “The ones who had my back and really pushed me hard.”

From there, the business has only continued to grow in clientele throughout Michiana, from the aforementioned Jim’s Smokin’ Cafe and Wrapped in Light, to Schultz HVAC in Mishawaka and Niezgodski Plumbing in South Bend. With the support of friends and community behind, the image that Beaird hopes to create for his business seems to be in sight.

New Image Decals’ business hours are from 9 a.m. to 6 p.m. Monday through Friday.