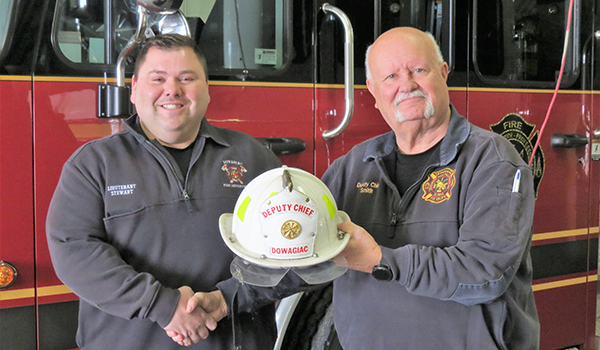 DOWAGIAC — Instead of passing the torch, the former leader of the local fire department has passed his helmet to the next in command.

After 16 years with the Dowagiac Fire Department, Lieutenant Tony Stewart has officially taken the reins as deputy chief after the retirement of former deputy chief and longtime firefighter Robert Smith.

“Today, I walked through the doors of the firehouse with added responsibility on my shoulders. Responsibilities that I have worked towards for over a decade,” Stewart said in a Jan. 28 Facebook post. “All the blood, sweat, and tears that I have given for the firehouse have paid off. The endless hours of training, the sleepless nights, the calls I’ll never forget, they all led me here.”

When Smith made the decision to retire, he began getting Stewart up to speed with his duties.

“I wanted to do it early enough so whoever got chosen had enough time to get knowledgeable in what had to be done day-to-day, and then turn the department into what they wanted it to be,” Smith said. “I think that’s all happening right now. I think the city’s in a good spot with where the fire department is headed.”

Smith and fellow longtime firefighter Robert Nelson both retired last week but will remain a part of operations. Between Nelson and Smith, there are more than 50 years of experience with the Dowagiac Fire Department.

“I’m glad they are not leaving altogether,” Stewart said. “They’re giving us the opportunity to help train and groom some less experienced firefighters. You can’t replace experience like that, so that is huge.”

Stewart said he has strived for the position of Chief his entire career and is honored to follow Smith and the other previous chiefs of the department.

“The past chiefs of this department have consistently upheld our mission – to serve our community with compassion, pride, and professionalism,” Stewart said. “I’m humbled and I’m thankful. I’m most thankful for is the trust that has been given to me. The trust of my family, my firefighters, and the great community that we live in. I have big goals for this department and will strive to make each day better than the next.”

Nelson said there is a great young core of firefighters at the department, and the time is now theirs. Smith believes the department will be in good hands with Stewart at the helm.

“We’re at a good place here now,” Smith said. “He’s a young man who is very knowledgeable, very aggressive, and he’s going to make some good efforts in the department.”

Stewart has been with the department since 2006 and was appointed lieutenant in 2018. He is looking forward to making his mark as chief.

“My biggest goal will be to mentor my fellow firefighters so that one day they will be as excited as I was for this opportunity,” he said. “Reminding them along the way that it’s not whether you get knocked down, it’s whether you get back up — to always push forward towards those goals and to never give up. Thanks again to everyone that has ever helped, led, mentored, or supported me to this point. I promise I’ll make you proud.”