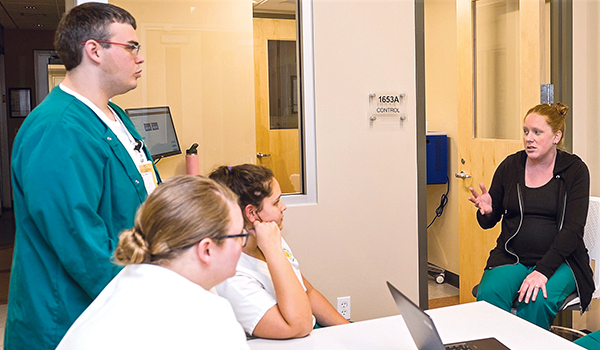 Expansion of the 1970 nursing facility began in August 2017, attaching it to the David C. Briegel Building on the Dowagiac campus. Funding came from Michigan’s $4 million contribution, SMC’s $4.5 million and donations that doubled the space to more than 29,000 square feet. Since its opening, 149 graduates have been educated in the building to date.

“The first major capital campaign this college has ever done, going out and asking the community for money, generated more than $1.1 million,” said retired President Dr. David Mathews at the Jan. 9, 2019, rededication. “The goal has been creating a facility matching the quality of the program. This is not a question of whether students get as good an experience working in simulation as with real patients. This is unquestionably a case where students get a better experience.”

Features of the building include two eight-bed skills labs with low-fidelity manikins. The four-bed Karen K. Rose Simulation Lab replicates a hospital room with high-fidelity manikins which mimic situations, from listening to lungs to stopping postpartum hemorrhaging – crisis skills they cannot actually practice during clinicals, where they only observe emergencies.

“There is a pediatric simulation room with a baby in a crib that cries, turns cyanotic (blue discoloration) and has issues such as respiration, and Pediatric Hal, a little boy,” said Nursing Chair Dr. Debra Green.

The robot had been in labor all night, growing increasingly cranky and uncomfortable as delivery approached.

“Practicing without potentially harming actual patients makes students feel more comfortable in real hospitals,” Green said, “I run everything Victoria does on a computer. … After each simulation, we debrief. I record this so they can watch, observe themselves and decide what they would do differently.”

Dean of Nursing and Health Services Dr. Melissa Kennedy explained the importance of the manikins.

“Low-fidelity manikins don’t do anything but lie there,” Kennedy said. “Foundations students learn every single basic nursing skill on them, even brushing someone’s teeth, which is not the same as brushing your own. You do care and comfort every single day as a nurse, somewhat like Major League Baseball players still hit off tees constantly because it’s about muscle memory. We practice catheters over and over until that skill is perfected. The simulation lab puts them in real-life situations they need to know, even if they don’t see them every day on the floor. Debriefings are the most important part because they foster thinking.”

Enhanced communication skills are a benefit in a world now propelled by terse text messages, according to Kennedy.

“When a manikin talks, [students] have no choice but to start communicating,” Kennedy said.

Kennedy graduated from the program in 2008, became a cardiac nurse, joined the faculty in 2011, taught medical-surgical and pharmacology courses and became dean in 2019 upon Rebecca Jellison’s retirement.

She said she is excited about Fire Science, which is being taught by Josh Jester from the Mishawaka Fire Department as the program revamps to better fit needs.

“Phase two would offer Fire I and II for high school students and people who aren’t already firefighters,” she said. “Mishawaka wants to partner with us to be the clinical setting twice a week, like nursing. [The Niles campus] could become the hiring hub for fire stations.”

According to Kennedy, students love the new building.

“They have so much pride,” she said. “They have a better sense of community, like a family. They cherish that it’s theirs and brag about it. It’s their home for two years, so some feel separation anxiety when they leave. That’s what this building has done.”