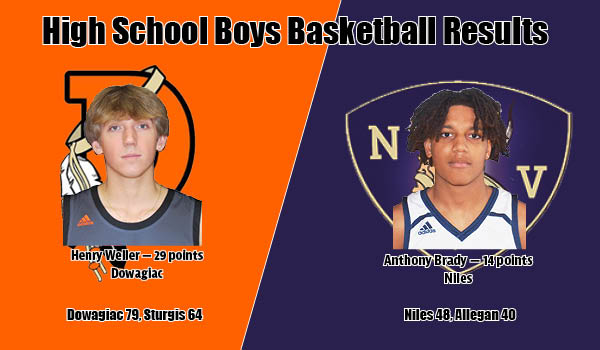 STURGIS — Friday night was good to a trio of road teams as Dowagiac, Niles and Cassopolis all picked up divisional or conference wins.

The Chieftains avenged an early-season loss at the hands of Sturgis by defeating the host Trojans 79-64 in Wolverine Conference South Division action. The Vikings snapped a four-game losing streak with a 48-40 Wolverine Conference non-divisional victory over host Allegan.

In Southwest 10 Conference action, Cassopolis continued its hot streak with a 38-31 win over host Comstock.

The focus for the Chieftains Friday night was the limit the scoring of Sturgis big-man J.J. Stevens, who scored 30 points — all in the paint — in the Trojans’ 52-36 win back in December.

Dowagiac accomplished its goal as Stevens was held to 16 points.

The Chieftains (6-4, 2-2 Wolverine South) exploded for 28 first-quarter points as they took a 28-12 lead into the second quarter. Dowagiac was able to maintain its double-digit lead as it headed into halftime, leading 47-30.

Sturgis (5-6, 1-3 Wolverine South) outscored the Chieftains 34-32 in the second half, but never came close to overcoming the early deficit.

Dowagiac twins Henry and Cole Weller had a big night as they combined for 54 of the Chieftains’ 79 points. Henry Weller scored a game-high 29 points to pace Dowagiac, while Cole Weller finished with 25. The Chieftains also got 10 points from Jordan Hardin.

Dowagiac travels to Niles Monday night to make up its Wolverine Conference South Division contest with the Vikings.

Niles increased its lead to 41-24, heading into the final eight minutes of play only to have Allegan come charging back.

The Tigers outscored the Vikings 16-7 in the fourth quarter to make the final outcome a bit more respectable.

Anthony Brady scored a game-high 14 points to lead Niles. He was the only Viking to make it into double figures. Elijah Hester finished with nine points and Mike Phillips six.

The Rangers won their fifth consecutive game as they turned a 13-13 halftime deadlock into a seven-point victory.

Daishean Jamison led a trio of Rangers in double figures with 11 points. Davion Goins and Daeton Gillam both finished with 10 points.

J.R. Kellum had 11 points and Mason Mollohan 10 for Comstock.

Cassopolis is back on the court Tuesday as it heads to Hartford for another Southwest 10 Conference contest.