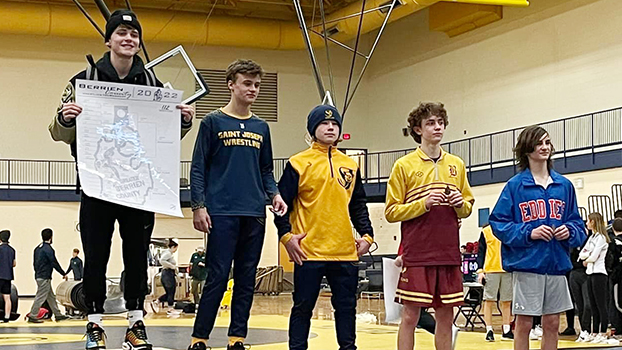 ST. JOSEPH — No other team has dominated the Greater Berrien County Invitational than the Lakeshore Lancers.

Returning after a year’s absence due to COVID-19, the Lancers easily won their 29th championship as they scored 239 points. St. Joseph was the runner-up with 217.5 points, while Edwardsburg finished third with 176 points.

Niles finished eighth with 80 points, Brandywine third with 64 and Dowagiac 10th with 59.5. Cassopolis was 16th with 5.5 points. None of those teams took a full roster of wrestlers to the invitational.

The Vikings, who have won nine Greater Berrien County Invitational championships, had an individual champion as at 112 pounds, Conner Pickens won by major decision over St. Joseph’s Noah Dahlke, 12-3.

Edwardsburg also had an individual champion as Andrew Harris edged Brandywine’s Philip McLauren 4-3 to claim the 215-pound title. The Eddies’ Nathan Andrina was the runner-up at 171 pounds after dropping a 5-1 decision to St. Joseph’s Jacob Halsey.

Brandywine’s Gavin Schoff was the runner-up at 152 pounds after falling by technical fall, 17-2, to Lakeshore’s Micah Hanau.