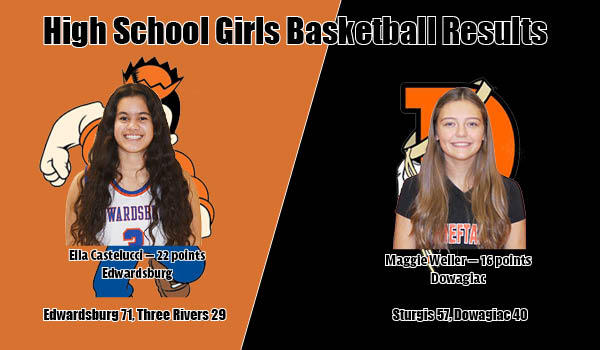 THREE RIVERS — The Edwardsburg girls basketball team locked up at least a share of the Wolverine Conference South Division title with a 71-29 win over host Three Rivers Friday night.

In other games, Cassopolis defeated Comstock 38-22 in a Southwest 10 Conference contest, while Mendon knocked off Marcellus 38-28 in Southwest 10 play.

Dowagiac was defeated by host Sturgis 57-40 in a Wolverine Conference South Division clash.

The No. 9-ranked Eddies improved to 13-0 overall and 6-0 in the South Division as Ella Castelucci poured in a game-high 22 points.

Besides Castelucci, Edwardsburg also got 12 points from Macey Laubach and Caitlin Tighe, along with 10 points from Katie Schaible.

Edwardsburg is off until Friday night when it hosts Dowagiac in a South Division contest.

Visiting Cassopolis built up a 16-point halftime lead and maintained it throughout the second half to knock off the Colts and improve to 8-4 overall and 7-3 in conference games.

The Rangers led 12-4 after the opening quarter and then doubled their advantage by outscoring Comstock 14-6 in the second quarter.

Lizariah Lewis had eight points for the Colts.

The Hornets remained a game back of Hartford in the Southwest 10 Conference standings following their win over the Wildcats.

Brooklyn Vantilburg led Marcellus and all scorers with 16 points. The rest of the Wildcats combined for 12 points.

Sturgis swept the season series with Dowagiac as the host Trojans jumped on the Chieftains early and never let up.

In the first meeting between the two schools, Sturgis pulled out a 33-28 win at Dowagiac in overtime in December.

After taking an 18-10 first-quarter lead, the Trojans were only able to increase their lead by a point in the second quarter. Leading 29-20 at halftime, Sturgis outscored Dowagiac 28-20 in the final 16 minutes to earn the victory.

“The difference in the game was we got outrebounded,” said Dowagiac Coach Jason Turner. “There were too many second and third and fourth opportunities.”

Maggie Weller and Alanah Smith both had 16 points for the Chieftains. Korin Whitcomb scored a game-high 22 points for Sturgis, which also got 17 points from Madison Ater.

Dowagiac travels to Niles Monday night to make up its South Division contest with the Vikings that was postponed due to COVID issues for the Chieftains.