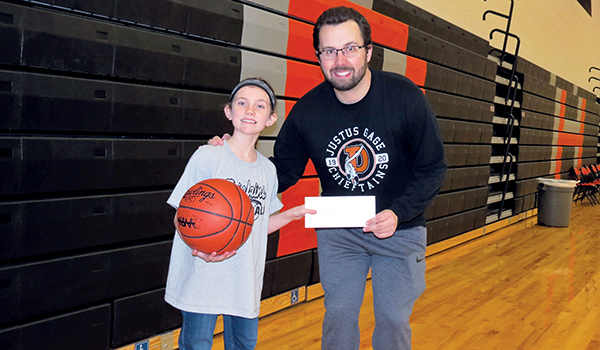 DOWAGIAC — When fifth-grader Kennedy Dwyer learned that one of her friends could not afford the $20 to participate in the local youth basketball program, she wanted to help. Two years later, the 10-year-old has turned that desire to help into a major contribution to the future of girls basketball in her community.

Since 2019, Dwyer has raised $760 for the Little Chieftains youth girls basketball program by selling Zick Sticks with her grandfather at soccer games. During Monday’s varsity girls basketball practice at Dowagiac High School, Dwyer presented Dowagiac coach and program organizer Jason Turner with $410 to go towards the program.

“I did it because I like to play basketball, and it would be nice for kids who don’t have the money for it to still play,” said Dwyer, who had previously raised $350 for the program in 2019. “I just felt like it was the right thing to do.”

Andy Parmley, Dwyer’s grandfather and ticket taker at home high school soccer games, has been involved with selling Zick Sticks at various local events and got the idea to sell them at games when he noticed there were no concessions available. Parmley got permission from the school to sell the sticks and would donate money from the proceeds to Dowagiac athletics.

Dwyer became interested in helping her “Poppie” sell the sticks, and the two eventually came up with the idea to use the money to help the youth basketball program.

“I feel really happy, and I’m actually really proud of how much work I did,” said Dwyer, who attends Justus Gage Elementary. “I went to as many games as I could.”

Turner, who started the program as a way to increase basketball interest among local girls, said the donations will not only help with scholarships for girls who can’t afford to attend but also contribute to new basketball rims, T-shirts and various gifts the girls earn by competing in the program.

“I just love her to death,” said Turner, who previously taught Dwyer in third grade and now teaches at the middle school. “I’m glad she was thinking of others and could do this for her friends and other people in the district.”

Dwyer’s mom Kelsey Parmley, a former teacher at Patrick Hamilton Elementary and current teacher in the Paw Paw district, said the idea to raise money was entirely her daughter’s.

“I am so proud of her,” Kelsey Parmley said. “That’s my girl. … It wasn’t mom or Poppie going. ‘hey, what do you think about this?’ It was 100 percent her, and it makes me so happy to know my girl thinks of others.”

A love of basketball runs in the family.

Dwyer and her step-brother, Riley McCaffery, have a healthy rivalry going on their driveway hoop at home. While McCaffery is nearly 5-feet, 11-inches tall and in seventh grade, Dwyer said she can sometimes score on him when the rim is lowered – though that means he can dunk on her.

“He towers over her,” Kelsey Parmley said. “But they’re outside all the time. … There are a lot of fights about basketballs at the house.”

Dwyer also has 6-year-old twin brothers, Colton and Vin, who play on their small hoop off to the side. Kelsey Parmley added the family will often play two-on-two in the driveway.

“I box you out half the time,” Dwyer said with a competitive tone. “I pushed her all the way back to the mini basketball hoop.”

Thanks to the family dynamic, Dwyer has cemented an interest in playing basketball, which is exactly what coach Turner wants to see come out of the youth program.

“We haven’t had youth leagues since I was probably in elementary school, so me and my coaching staff decided we wanted to get this going again,” he said. “We’ve got to start them young. … We’ve got to get them interested so we’re not teaching the basics in middle school and high school.”

Follow “Dowagiac Girls Basketball” on Facebook for updated information on the youth program, as well as the middle school and high school teams.