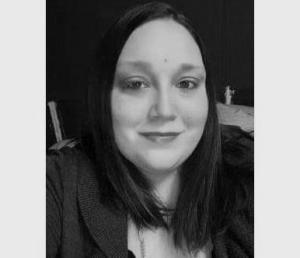 Ashley A. Turnbow, a beautiful soul who suddenly passed away at her home in Dowagiac, on Jan. 23, 2022.

Ashley was born in Berrien Center, Michigan, to her mother, Debra Hunsberger, and her father, David Turnbow, on Feb. 7, 1991.

Ashley was many things to many people, but the one thing she was for everybody in her life was a great friend. She was the kind of person that would have you smiling so much your cheeks would hurt. Her contagious laugh, fun sense of humor, and her genuine care for others are the things that helped her make others feel at ease. Putting others before herself was simply just a part of who she was. She was smart, thoughtful, and witty. Growing up on a farm gave her a sense of work ethic that eventually led to her getting through school and becoming a pharmacy tech, the work she was hoping to make a lifelong career out of. When she wasn’t working or pouring herself into others, a few of the things that she would do for fun included, fairs, rodeos, a body of water, or animals. She had many great experiences with her family out at the Fuller’s Resort & Campground in Buchanan. Swimming in the lake was her favorite thing to do in the summer, although nothing gave her a better laugh than bringing her city slickin’ cousins to the country. She loved to share the things that brought her joy and that’s one of the many things that made her so easy to be around.

Although her life ended far too early, she still surrounded herself with the things that lifted her up the most. Unsurprising to anybody that knew her, the people in her life were what she held closest to her heart. She was always surrounded by her extremely loving family whom she could rely on for anything she needed. Her mom and loving step-dad, Scott Everman, raised her to be the caring individual that she was. She eventually became an incredible mom to her son, Brayden Turnbow, who was the highlight of her life. She also was known as the world’s greatest aunty to all of her nieces and nephews. She was the special aunt who attended as many games, performances, and events as she could. As nice as she was, she also didn’t mind giving somebody a hard time if they were slacking. She was the member of the family who could help keep everybody accountable and she certainly wasn’t one to lose an argument. Ashley had a heart of gold and will be sorely missed by so many friends, family members, and loved ones. The memories she shared with so many people will never be forgotten.

Ashley is preceded in death by her grandparents on her mom’s side, her step-grandpa on her dad’s side; uncles, William Hunsberger, Bruce Turnbow; her loving aunts, Cathy Hunsberger, and Vickie Riggs; and a close cousin, Leslie Turnbow.

She is survived by her son, Brayden Turnbow; her mom and step-dad, Debra Hunsberger and Scott Everman; her father, David Turnbow; her sister, Amber (Robert) Baker; step-sister, Sarah McGrew; cousins, numerous cousins; her nieces and nephews, Kristin Turnbow, Kayla Baker, Amya Baker, Ethin McGrew, Robert Baker, Kamron Baker, along with a host of adopted nieces and nephews; her grandmother, Peggy Barkes; her step-grandparents, Keith and Maryann Everman; many aunts and uncles; as well as many other extended family members and friends.

The family will be hosting a gathering at a later date that has yet to be determined.