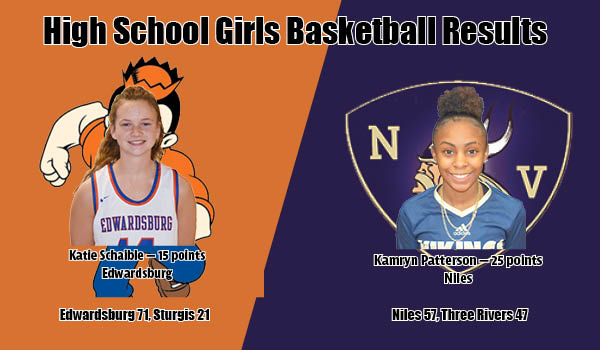 The undefeated and No. 9-ranked Eddies rolled to an easy 71-21 win over Sturgis in a South Division contest. Edwardsburg completed the season sweep of the Trojans with the victory. The Eddies defeated Sturgis 76-6 in the season-opener.

Edwardsburg (12-0, 5-0 Wolverine South) held the host Trojans to eight first-half points, including shutting out Sturgis in the second quarter, as it built a 38-8 halftime advantage.

The Eddies took a 58-18 lead into the final quarter.

Katie Schaible led a trio of Edwardsburg players in double figures with a game-high 15 points. Ella Castelucci and Macey Laubach both finished with 13 points, while Caitlin Tighe had nine points, and Kenzie Schaible and Averie Markel both added eight points.

Edwardsburg will travel to Three Rivers for another Wolverine South contest Friday night.

Kamryn Patterson and Amara Palmer, who both signed letters of intent to continue their careers at Southwestern Michigan College this week, combined for 42 of Niles’ 57 points in its win over the host Wildcats.

Patterson scored a game-high 25 points for the Vikings, who were tied with Three Rivers at 8-8 following the opening quarter. Palmer helped Niles take control of the game from there as she finished with 17 points.

Niles remains on the road Friday night as it travels to Allegan for a Wolverine Conference non-divisional game.