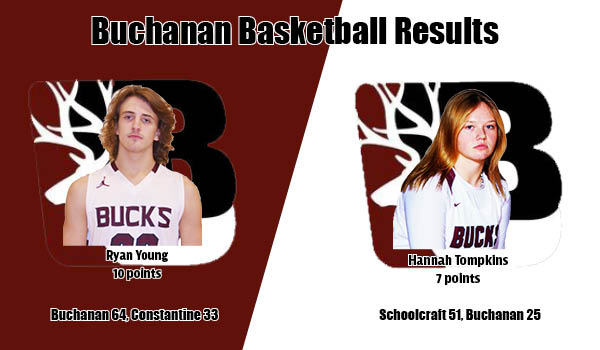 BUCHANAN — The Buchanan boys basketball team is on a roll.

The Buchanan girls team was not as fortunate, as the Bucks were defeated by Schoolcraft 51-25 in a battle of Division 3 honorable mention squads.

Behind Ryan Young’s game-high 21 points, Buchanan improved to 4-5 on the season.

The Bucks led at each quarter break as they turned a 20-13 first-quarter advantage into a 35-20 halftime lead. In the second half, Buchanan outscored the Falcons 29-13 to turn the game into a rout.

Besides Young, the Bucks also got 10 points from Brady Thompson, eight points from Connor Legault, and seven from Thomas VanOverberghe.

The Bucks will host Berrien Springs in a BCS Athletic Conference Red Division contest Friday night. Buchanan will be looking to avenge a 50-47 loss to the Shamrocks back on Dec. 10.

The Bucks (10-2) had a bad night offensively, which allowed the Eagles to slowly pull away for the win. Buchanan trailed 11-7 after one quarter and 26-14 by halftime. Schoolcraft (9-1) increased its lead to 37-18 heading into the final quarter.

The Bucks did not have a single player reach double figures against the Eagles. Hannah Tompkins led Buchanan with seven points. Hailey Jonatzke added six points. LaBria Austin, who entered the game averaging more than 11 points per game, was held scoreless.

Mackenzie Miller scored a game-high 18 points to pace Schoolcraft, which also got 15 points from Allie Walther and 10 points from Hannah Thompson.