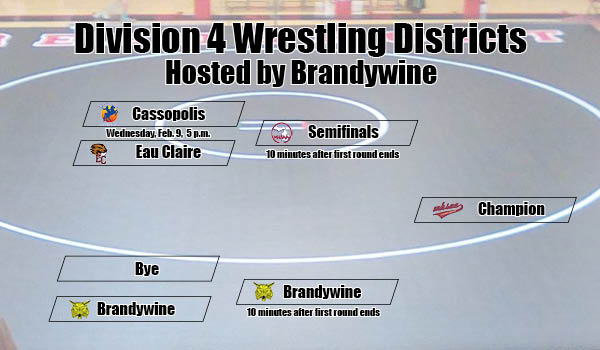 Brandywine, Buchanan and Edwardsburg are all hosting the team district round of the state tournament. The Bobcats, who have won 21 out of the last 22 team district championships, will kickoff the area wrestling tournament Feb. 9 by hosting Cassopolis and Eau Claire in Division 4.

River Valley opted out of competing in the team tournament.

The Bobcats received a first-round bye during the draw, which means Brandywine will host the winner of the Rangers-Beavers semifinal, which is scheduled to begin at 5 p.m. The championship match will begin 10 minutes following the completion of the opening round. That may have to be extended beyond 10 minutes, as rules do not allow wrestlers to compete less than 45 minutes after their previous match.

Veteran Brandywine Coach Rex Pomranka, who picked up his 400th career victory last week, said that numbers are a problem throughout the state. His team does the best it can to field a full lineup, but if it cannot, it tries to be as good as it can be.

“At our last weekend tournament, Edwardsburg was the only school with a full lineup, and we had three Class B schools there,” he said. “It is something that is going on around the entire state. We try to be competitive even if we can’t fill a lineup.”

Admission for the district tournament is $6 per person, and no passes will be accepted. 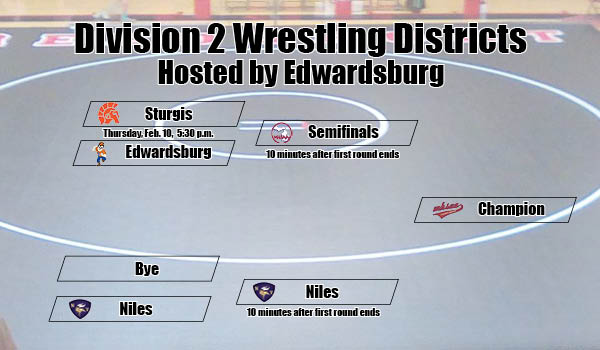 Edwardsburg will be looking for its third district championship in the last four years as it hosts Wolverine Conference foe Sturgis in the opening round, which is scheduled to begin at 5:30 p.m. on Feb 10.

The Eddies defeated the Trojans 71-3 in their league dual last Wednesday.

Niles received a first-round bye and will take on the winner of the first match 10 minutes after its completion.

The Vikings have lost to Edwardsburg, but defeated Sturgis 56-12 in a Wolverine Conference dual.

The winner will advance to the Division 2 Regional, which will be hosted by the winner of the Stevensville-Lakeshore District. 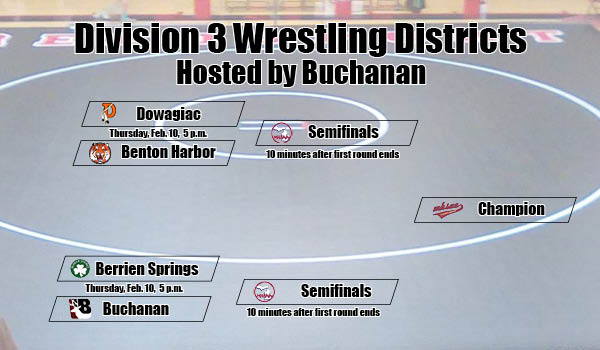 It has been an up-and-down year for the Dowagiac wrestling team, but the Chieftains are positioning themselves to win a fifth consecutive district championship.

Dowagiac will face Benton Harbor at 5 p.m. in the opening round at Buchanan High School Feb. 10. The host Bucks will take on Berrien Springs in the other semifinal. The championship match will begin 10 minutes after the conclusion of the semifinals.

The winner advances to the Division 3 Regional, which will be hosted by Coloma.

Brandywine vs. Cassopolis-Eau Claire winner, 10 minutes after completion of first round

The match will begin 10 minutes after completion of first round

Niles vs. Edwardsburg-Sturgis winner, 10 minutes after completion of first round