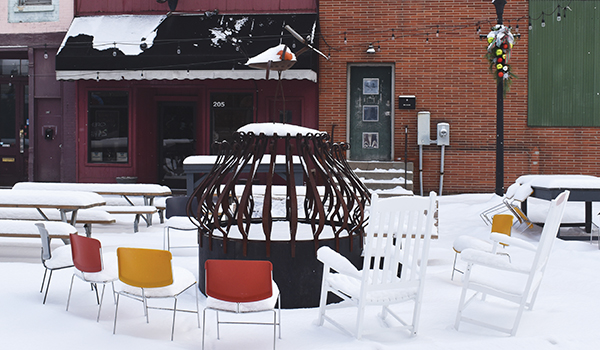 NILES — Work to dismantle the Niles Outdoor Dining Experience was underway Tuesday morning, but Niles Main Street Downtown Development Authority officials said this is not the end — it is only the beginning.

Monday evening, Niles City Council members voted 5-2 to approve a DDA recommendation to reopen the portion of Second Street where the NODE currently resides for the winter. Previously, the council had approved the NODE to remain open through the end of April. According to a memo provided to city council, the action will allow for a formalized plan on how to proceed in the spring.

“The community needs to look at this as a beginning, not an end,” Croteau said. “We are very blessed that [the Michigan Economic Development Corporation] and Michigan Main Street are willing to offer us this opportunity and that council accepted this opportunity.”

As the location of the NODE has been the subject of intense public debate for several months, Croteau believes that working with Michigan Main Street to identify and design a new outdoor gathering space is in the best interests of the city and will make the NODE better than ever.

“People have been overwhelmingly in favor of the concept of a NODE, the location being the main point of contention, so being able to work with an independent third party to find a location and come up with some designs that we can truly act on is pretty amazing,” she said.

Croteau hopes to have a new outdoor gathering space up and running by late spring or early summer.

“Michigan Main Street absolutely understands the importance of this and that time is of the essence,” Croteau said. “Our goal is to have something we can work on sooner rather than later. … I’m excited to see what happens.”