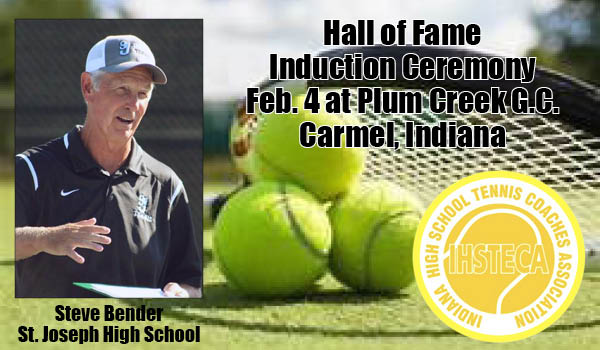 SOUTH BEND, Ind. — Former Buchanan High School Boys Tennis Coach Steve Bender will be inducted into the hall of fame for the second time in his career.

Bender, who coached the Bucks for 22 years before heading across the border to take over the St. Joseph High School boys tennis program, is already a Michigan High School Tennis Coaches Hall of Fame member.

On Feb. 4, Bender will be inducted into the Indiana High School Tennis Hall of Fame in a ceremony at Plum Creek Golf Club in Carmel, Indiana. Social hour begins at 6 p.m., with dinner to follow at 6:45.

“I was totally shocked and humbled, since I have only been coaching at St. Joseph for 12 years,” Bender said. “I do think the reason I was inducted into the Michigan High School Tennis Coaches Hall of Fame was based on our great record at Buchannan with only four courts.”

At Buchanan, Bender’s Bucks won the 2003 state championship and appeared in seven final fours. During his 22 years, Bender amassed a record of 200-16, which included 18 conference championships, 16 regional championships and 15 undefeated dual match seasons.

The Bucks also had a 66-match winning streak, which is the second-longest in Michigan, and winning 74 individual championships, which ranks sixth all-time in the state.

Bender is also proud of his “Bridging-Bonding-Building” program, which is designed to aid in team building.

“Its popularity has us presenting at state coaching conventions in Indiana and Michigan,” he said. “Championship Productions from Ames, Iowa, came to film two videos on what we do. I sincerely feel the Indiana Coaches Board of Directors are honoring us more for what we do for developing a tennis family than our overall record.”

Bender said that over his years of coaching, he has learned that building relationships is more important than any victory on the court.

“We have become a well-respected program in Indiana with our superb sportsmanship and a philosophy of ‘playing for something more important than yourself,’” he said.