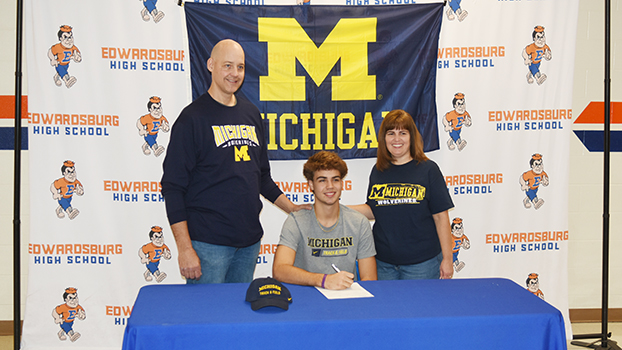 Edwardsburg senior Luke Stowasser poses for a photo with family after signing his letter of intent to compete in track and field for The University of Michigan. (Leader photo/SCOTT NOVAK)

EDWARDSBURG — Luke Stowasser is looking forward to taking his talents to the next level.

The record-breaking Edwardsburg senior signed with the University of Michigan track and field program last fall, choosing the Wolverines over Michigan State University.

“It was a really tough decision,” he said. “I took some visits, and it basically came down to wherever it felt more like home, and that was just Michigan for me. Everyone there is great. They have a great coaching staff, and I’m looking forward to next year.”

After committing to Michigan, Stowasser attended the Wolverines’ 42-27 win over rival Ohio State, an experience that let him know he made the right decision.

“It was awesome,” he said. “We got to go down on the field before the game, and after the game, we rushed the field, and it was crazy. It was packed out there.”

The Wolverines will be getting one of the best leapers not only in the state of Michigan, but the entire country.

Stowasser set school records in both the high jump (6-10) and long jump (22-6.5) at the 2021 Division 2 regional meet last year. Stowasser’s record high jump was the highest jump in the state this year, and his long jump was third overall.

Last summer, Stowasser was invited to compete against the best jumpers in the country at the Nike-sponsored National Scholastic Athletics Foundation Outdoor Nationals at the University of Oregon.

According to Athletic.net, Stowasser enters his senior season with the third-best high jump height in the nation.

Stowasser said the staff has big plans in store for when he arrives on campus this fall.

“They were pretty much talking about how they would make me better as an athlete there, how I would impact the team and how we could work together and stuff. The academics are amazing there. Altogether, it’s a great school.”

While Stowasser is currently focused on helping the Edwardsburg boys basketball team attempt to achieve its goals, Stowasser has lofty goals for himself this upcoming track season, including breaking the state record high jump height of 7-1 set by John Payment, of Brimley, in 1989.

More than anything, Stowasser looks forward to representing Edwardsburg on the collegiate stage for years to come.

“I’m always striving to get myself better every day,” he said. “I do this for the community and look forward to putting on a show out there.”