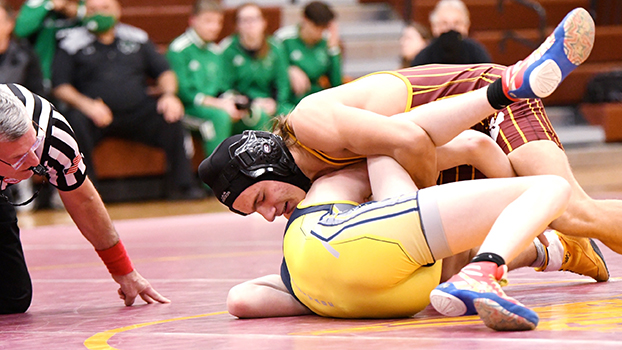 Gavin Schoff was one of two Brandywine wrestlers to win individual titles at the Shawn Cockrell Memorial in Quincy on Saturday. (Leader photo/KELLY SWEENEY

Josmar Perez finished third in 103 pounds as he won by major decision (8-0) over Dansville’s Rowan Bartlett. Kaiden Rieth as the runner-up at 112 pounds after falling to Napoleon’s Brenden Yob 8-6.

Drake Heath took fourth place at 125-pound after dropping a 7-6 decision to David Fielder, of Hanover-Horton.

Dowagiac went 1-3 at the Lakeshore Super Duals on Saturday.

The Chieftains lone win game against Cedar Springs, 42-41, in a match that was decided by an unsportsmanlike conduct call against a Cedar Springs coach.