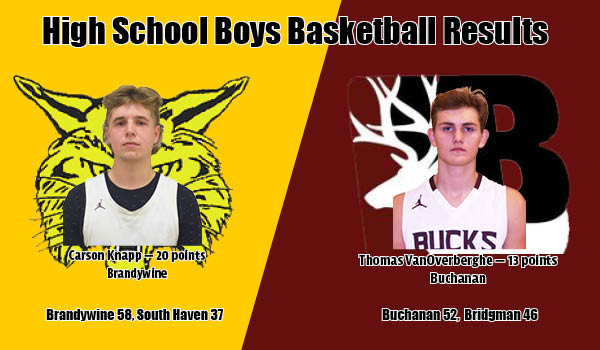 The host Bobcats defeated South Haven 58-37 in a BCS Athletic Conference Red Division contest, while the Bucks knocked of Bridgman 52-46 in a non-divisional BCS contest.

Brandywine raced out to a 20-point halftime lead and never looked back against the Rams.

Brandywine never let up as it upped its advantage to 52-21 heading into the final quarter.

Carson Knapp scored a game-high 20 points to lead the Bobcats, who also got 17 points from Jeramiah Palmer and seven points from Jamier Palmer.

Brandywine is back in action Monday as it hosts Lake Michigan Catholic in a non-divisional BCS contest.

Buchanan won its second straight contest as it was able to turn a 22-20 halftime deficit into a victory. It was also the second consecutive game that the Bucks (3-5) rallied in the fourth quarter for a win. On Tuesday night, Buchanan edged Niles 42-40.

Bridgman (4-6) led 13-7 after the opening quarter and by two at the intermission. Buchanan trailed 31-30 heading into the final eight minutes of play, but outscored the Bees 22-15 to pull out the win.

Brady Thompson led the Bucks with 14 points, while Thomas VanOverberghe added 13. Ryan Young, who entered the game as southwest Michigan’s top scorer with an average of 21.9 points per game, was held to 10 points.

Buchanan is back on the court Tuesday as it hosts Constantine in a non-conference contest.