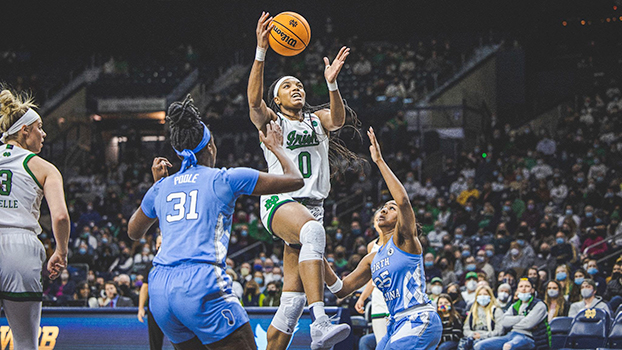 The Notre Dame women’s basketball team outscored the Pittsburgh Panthers 38-24 in the second half to march on to a 77-63. (Photo courtesy the University of Notre Dame)

PITTSBURGH — The No. 19-ranked Notre Dame women’s basketball team outscored the Pittsburgh Panthers 38-24 in the second half to march on to a 77-63 victory inside the Petersen Events Center on Sunday.

In fact, the Irish defense limited the Panthers to just eight points in the fourth quarter.

Maya Dodson continues her best stretch of her collegiate career, recording her sixth straight game in double figures, including her third 20-plus point performance in said stretch. Dodson finished with a game high 23 points and even collected a double-double along the way with 12 boards. It marked her second double-double of the year.

It was tied at eight-all before Notre Dame (14-4, 5-2) suffered a four-and-a-half-minute scoring drought, missing six straight shots. As a result, Pitt built a 14-8 advantage. However, over the final 2:41, the Irish connected on four straight and fired off a 9-2 scoring spree to reclaim the lead, 17-16, after the opening period. Dodson and Miles each scored six points in the quarter.

Speaking of Dodson, she started the second quarter with an and-one and was in double figures already just 12 minutes into the contest. Fast forward to 4:37 in the second, the Irish were up 33-26, but proceeded to give up an 11-2 Pitt scoring run. Later, a Citron three-pointer in the corner tied the game at 39-all heading into halftime.

Back-to-back layups to kick off the second half put Miles in double-digits by the 8:16 mark. Next, at 6:11 in the third, Brunelle hit a three, which ignited a combined 9-0 run between her and Dodson spanning 1:12.

Up just four in the fourth, Brunelle connected on a clutch and one, which was followed by a Citron pull-up jumper, as the quick 5-0 run gave the Irish a 69-60 lead with 5:36 remaining.

Notre Dame put its foot down from there on as Westbeld, Citron and Miles polished off the scoring while the defense did its thing, allowing just eight points in the quarter.

The Fighting Irish will finally get a much-needed homestand this coming week, starting with Syracuse at 6 p.m. on Thursday, on ACC Network. The Syracuse matchup kicks off four straight games inside Purcell Pavilion, as the Irish also host Boston College on Jan. 30 and N.C. State on Feb. 1 and Virginia Tech on Feb. 3.