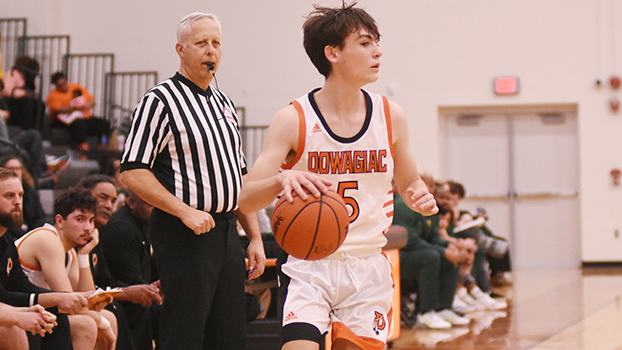 The Wildcats won the girl’s game 42-31, while the boy’s team completed the sweep with a 53-44 victory over the Chieftains. 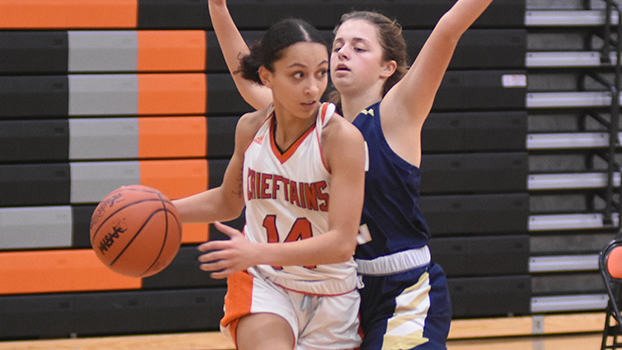 Makayla Hill scored eight points for the Chieftains in their loss to the Wildcats. (Leader file photo)

Dowagiac (2-9, 0-3 Wolverine South) was unable to overcome an 11-point, first-quarter deficit in falling to Three Rivers.

After one quarter, the Chieftains trailed the Wildcats 14-3 and spent the rest of the game trying to overcome that deficit. In the second quarter, Dowagiac outscored Three Rivers 11-7 to cut the Wildcats’ lead to 21-14 by halftime. It would be as close as the Chieftains would get.

Coming out of the locker room to begin the third quarter, Three Rivers quickly pushed its advantage back into double digits. A late Dowagiac rally closed the gap back down to seven points, 30-23, heading into the fourth quarter.

Again, the Wildcats were able to push their lead back to double digits, where it spent most of the final eight minutes.

Dowagiac returns to the court Tuesday night as it heads to Paw Paw for a Wolverine Conference non-divisional contest.

An off shooting night led to Dowagiac falling to Three Rivers, ending its three-game winning streak.

The Chieftains (4-4, 1-2 Wolverine South) also struggled defensive against the Wildcats, were able to knock down shots from the outside, and penetrate into the lane for easy baskets.

The game was close throughout, with Three Rivers grabbing a 13-11 lead after one quarter, which it improved to 25-21 by halftime. The Wildcats continued to slowly pull away from Dowagiac in the second half, as they took a 39-33 advantage into the final quarter.

Henry Weller scored a game-high 22 points to lead the Chieftains, who also got 11 points from Ethan Hannapel and Jordan Hardin.

Connor Quake had 18 points, 15 of which came on 3-pointers, to pace the Wildcats, who also got 17 points from Drew Brown and 12 points from Angelo Hausmainis.