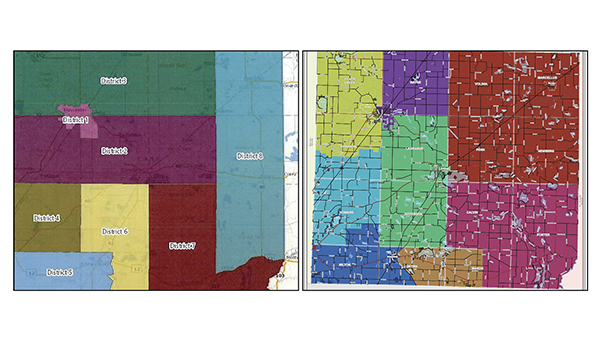 A lawsuit was filed in November of Cass County Apportionment plans. Those involved argue that two proposed plans, the Ludman plan, left, and the McMichael plan, right, were driven by partisan interests. (Submitted)

CASSOPOLIS — The latest map of commissioner districts drawn by Cass County leaders has come under fire.

A lawsuit filed in November against the Cass County Apportionment Commission has accused the commission of adopting a plan that unnecessarily splits the city of Dowagiac, diluting the minority vote in a once-competitive commissioner district and gerrymandering Democrats out of their only chance at a commissioner seat.

The lawsuit, filed by county resident and Cassopolis Village Council Trustee Jim Pedersen, also alleges the commission – primarily composed of Republicans – denied a fairer plan written by the only Democrat on the commission.

The adopted plan, submitted by County Clerk Monica McMichael, combines Dowagiac’s Ward 1 with Silver Creek Township and Pokagon Township, while Ward 2 and Ward 3 are combined with Wayne Township. According to the lawsuit, the McMichael Plan is in violation of MCL 46.404, which states “no township or part thereof shall be combined with any city or part thereof for a single district, unless such combination is needed to meet the population standard.”

Pedersen claims the members of the commission have intentionally adopted the plan, which he said gives Cass County Republicans an advantage in all eight commissioner districts, while the plan submitted by Ludman keeps Dowagiac mostly intact and leaves one competitive district out of the eight total districts created by the McMichael plan.

“The apportionment adopted by the committee is faulty under the law because it divides the city of Dowagiac for no good reason,” Pedersen said. “I believe strongly that it was done for partisan gain.”

McMichael denied any partisanship in the drawing of her plan, saying she used software provided by the state and the 2020 census population numbers to draw the map.

According to 2020 presidential election results, Ward 1 and Ward 2 of Dowagiac are the only Democratic-leaning areas of the county, with Ward 1 overwhelmingly voting democratic. The 2020 census for Dowagiac shows roughly 71 percent of one-race individuals in Dowagiac were white, with Cass County overall at 91 percent.

While Ludman – chair of the Cass County Democrats – declined to comment, she referred to her affidavit submitted with the lawsuit against her own committee, which consists of the county clerk, treasurer, prosecuting attorney and the chairpersons of the two major political parties.

“Splitting the city and combining its Ward 1 precinct with Silver Creek Township and Pokagon Township … creates a district that is 78 percent white and 60 percent Republican, diluting the minority vote in Ward 1,” stated the Ludman affidavit. “The City of Dowagiac – if not divided – is virtually the only area that is competitive between Republicans and Democrats in the entire County. When viewed in this context, the only reasonable conclusion to draw from the fact that the adopted McMichael Plan would divide the city of Dowagiac and combine it with the surrounding Townships is to effect partisan political advantage.”

McMichael, in turn, accused the Ludman plan of being drawn in a partisan manner.

“There were six or seven maps submitted to the commission for consideration. Of those maps, one map was submitted by an individual who stated it was drawn to create a partisan district,” McMichael said.  “It was further discussed that map was created in software separate from that provided by the state … that software used past election data to show voting trends. Because it was announced that the ‘Ludman Plan’ was drawn to create a competitive partisan district, I did not vote for that option as it violated MCL 46.404(h).”

Pederson disagreed, saying Republican committee members have misread the statute, which states “districts shall not be drawn to effect partisan political
advantage.”

According to the Ludman affidavit, the Ludman plan results in a near-split district of 49 percent Democratic voters and 48.5 percent Republican voters.

“There seems to be confusion with the Republican members of the committee,” Pederson said.  “They seem to think that you can’t consider party politics whatsoever. … It was just one seat where a Democrat might get elected.”

Pederson conceded that Cass County overwhelmingly votes Republican as a whole, and the McMichael Plan meets the minimum requirements for adoption. However, he maintained the McMichael plan amounts to gerrymandering, while he believes the Ludman plan is fairer.

“It’s important that Cass County residents have faith in their county commission making fair, wise and impartial decisions,” Pedersen said. “It’s almost absurd that the four members of the committee insist on having all eight commissioners be Republican. All we’re saying is, maybe one district can have a chance of getting a Democrat elected.”

In 2018, the voters of Michigan adopted a ballot initiative to re-draw state districts in a non-partisan effort to eliminate gerrymandering. According to Pederson, what is happening in Cass County is also happening in majority Democratic counties such as Wayne and Washtenaw, but to the opposite effect.

“It is purely a political process,” he said. “This is such a thing that I’m pressing on – the county reform of the apportionment process in Michigan. Now, we’ve blown it, and it’s going to be another 10 years until the next apportionment. In all 83 counties in Michigan, the very thing we have fought so hard to end at the state and federal level, is going on at the county level. It’s horrible.”

“Meanwhile, I’m watching this [county] process, and I’m pulling my hair out,” Pedersen said. “This is such a partisan process. Why has it escaped everybody’s
attention?”

Decision on the lawsuit is currently pending in the Michigan Court of Appeals.