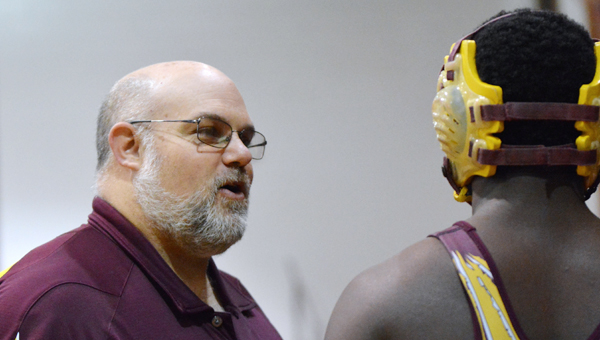 BUCHANAN — Despite only having seven wrestlers available for its BCS Athletic Conference Quad hosted by Buchanan, veteran Brandywine Coach Rex Pomranka picked up his 400th career victory as the Bobcats defeated Lawrence 39-36.

Pomranka took over the Brandywine wrestling program from Brad Light 18 years ago. Along the way, the Bobcats have won numerous conference and division championships, and district and regional titles in the post-season. Brandywine is the defending BCS Athletic Conference outright champion.

During one stretch, the Bobcats won every district championship from 1998 to 2004, and from 2006 to 2019. Individually, Brandywine has had more than its fair share of conference, district and regional champions, as well as state placers.

Among the best that Pomranka coached were Chanc Ravish, who won 145 matches for the Bobcats and was a state runner-up, and Hunter Heath broke Ravish’s career record last year and won more than 150 career matches. Heath finished third last year at the Division 3 state finals.

“I think there has only been one year, and I have been coaching here since 2004, that we didn’t have someone qualify for the individual state finals,” Pomranka said.

That year, the Bobcats had a state qualifier, but he failed to make weight and could not compete.

Pomranka said it was ironic that Tony Holt, a long-time assistant at Brandywine with him, was the official working the match.

Pomranka is proud of his accomplishment, and he is the only wrestling coach at Brandywine to achieve that type of success.

“If you stop and look at it, tonight I only had seven wrestlers in the lineup,” he said. “Because of some injuries over the weekend and some sickness, and they had pretty much a full lineup, but we were still able to beat them. I put seven guys on the mat, and all seven won. That is the kind of caliber of kids that we have got. We might not always have a full line up, but you better come ready to wrestle.”

Some of the most memorable matches for Pomranka have come against some of the perennial state powerhouses such as Constantine.

“When we wrestled Constantine in the districts one year, they had beaten us by nine earlier in the season,” he said. “They tried to do the same weight bump, and we bumped with them. We bumped Warren Watson up, and we beat them at the team districts. We had some great dual meets with Schoolcraft and Decatur. There were so many of them.”

Pomranka and the Bobcats are currently in the hunt for another BCS championship and getting ready to return to the winning circle as the Bobcats are back in Division 4 this season and hosting the district tournament Feb. 10.