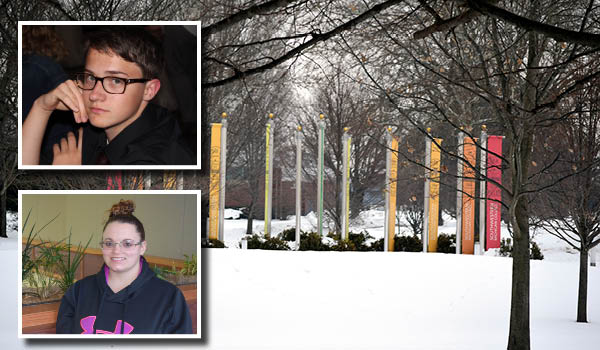 SMC Associate Professor Don Ricker and mediator Ruth Andrews, as trainers, worked in tandem with the Cass County Prosecutor’s Office for sessions in the Foster W. Daugherty Building on the Dowagiac campus.

Tambree Phillips, of Dowagiac, and Ryan Peterson, of South Haven, expect to be assigned their first cases in January.

“Restorative Justice is a program I am familiar with from my days working in Muskegon County, as well as its use in a fair number of other Michigan counties,” said Prosecutor Victor Fitz. “Cass County will be considering its use on a case-by-case basis in non-assaultive juvenile matters.”

“A threshold requirement is that the victim, the investigators and my office are in agreement with its application to any particular juvenile offender,” Fitz added. “The Prosecutor’s Office will screen cases for eligibility. And again, those matters involving assaultive offenses will not be considered.”

Fitz said the program is not for every juvenile offender.

“It will be introduced at a measured pace to assess its effectiveness and to increase the likelihood of long-term success,” he said. “The juvenile justice system deals with kids who have broken the criminal law. Due to their youthfulness, programs such as restorative justice have the potential to get these minors on the right track. Accountability is expected. But if they qualify and comply with the program, kids can avoid establishing a long-term offense record. Bottom line, in this program, success or failure will be up to them.”

Restorative justice views crime as more than lawbreaking, it also harms people, relationships and the community, Fitz said, added that a just response must address those harms as well as the wrongdoing. If the parties are willing, the best way to do this is to help them meet to discuss those harms and how to resolve them.

Her brother is a Cassopolis police officer, and she wants to become a corrections officer.

As a DUHS senior, she attended Van Buren Tech Center in Lawrence, participating in “ride-alongs” with Dowagiac and Cass County officers, the Michigan State Police Paw Paw post and the Cass County Jail and Law and Courts Building.

Phillips thought mediation sounded like a good skill to have if she wound up working for the courts instead of corrections.

“In law enforcement, you’re taught to see someone as a suspect, always watching people and surroundings,” Phillips said. “In mediation, it’s not just about the victim, you have to be about the offender, too, and listen empathetically to both sides of the story. I think police officers should take it. If people did mediation, a lot of issues could be resolved before they started.”

Peterson, who aspires to be a state trooper, wanted to be able to understand both sides of a crime, rather than just one side or the other.

‘This training really opened up my mind because law enforcement mainly focuses on catching bad guys,” he said. “Going through this training gave me a new perspective on how to handle certain situations. It helps to understand both parties involved. As a trooper, mediation could be a positive and negative. I see it helping troopers understand situations and circumstances of some crimes, but I also see it hindering troopers’ decisions. Mediation wouldn’t be a good thing to practice while on duty in the field because of risks it could raise, but where it is placed in the justice system fits quite well. I think it is a good opportunity for everyone involved, including the courts. It provides an opportunity to pass less-serious cases out of court to allow more serious cases to be prioritized and focused on.”

Before the training, Peterson was not familiar with the concept.

“Participating helped me understand that sometimes a victim of a crime doesn’t want to be repaid, they just want to be heard and to gain respect from the defendant,” he said. “Sometimes the defendant felt like they had no other choice than to commit the crime they are being accused of. Mediation can help both parties understand what each went through, and it could even open up doors. Sometimes there are situations where the crime was a major misunderstanding, and both parties end up staying connected. It also opens up doors for the defendant and possibly leads them to other sources to help get them out of the hole they’re in.”

Phillips added that mediation is an additional tool for law enforcement.

“They said about four out of five cases work,” Phillips said. “If mediation doesn’t work, we send it back and the prosecutor and courts handle it from there. We meet at secure public locations with some privacy, and everything’s confidential. The mediator takes notes that are destroyed afterward. If we come up with an agreement, we write up a contract, both sides sign it, and it’s sent to the prosecutor to be finalized.”