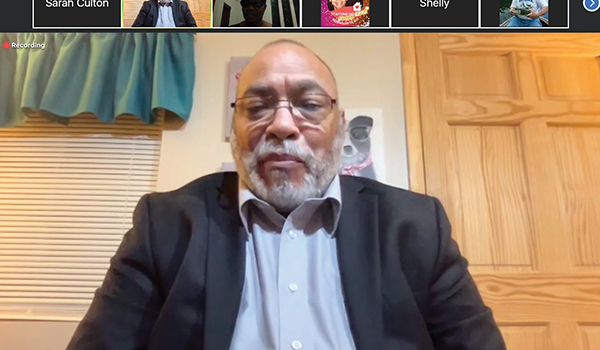 CASSOPOLIS — Monday evening, one Cassopolis organization took the time to look toward the future of the community, while recognizing a figure from the past.

Monday evening, the League for Encouraging Empowerment, a Cassopolis nonprofit known as LEE, hosted a virtual celebration in honor of Martin Luther King Jr. Day. The event, which honored the life and legacy of the late Civil Rights Movement leader, featured speeches from community leaders as well as an award presentation. The event was hosted virtually over Zoom.

Following a speech from Eric Williams, of the Church of Cassopolis, and a prayer, Village President David Johnson took over the Zoom call.

“I appreciate the opportunity to speak on behalf of the village today,” he said.

In his remarks, Johnson used the words of King to encourage the audience to envision a brighter future for their communities.

“We need to build a brighter future, not just talk about it,” he said. “I think the mindset of ‘it takes a village’ is a powerful one to build a brighter, better, more peaceful future for ourselves and our children. … Dr. King said it like this, ‘Our lives begin to end the day we become silent about the things that matter,’ so we need to always keep in the front of our minds that our children matter. Our community matters. The village matters.”

To achieve that brighter future, Johnson said community members must work together and be courageous.

“Dr. King said this also, ‘we cannot walk alone, and as we walk, we must make the pledge that we will also march ahead. We cannot turn back,’” he said. “Today, amongst all the turmoil and chaos in the streets, we are faced with the opportunity to march ahead or turn back and give up. It’s easy for us to say, ‘let the next generation fix the problem. Let someone else deal with this mess.’ … It takes courage to do the right thing, to stand up and fight against wrong, not just when wrong is done against me.”

Following speeches, LEE officials took the opportunity to present an award to one community member who had supported the MLK Day celebration over the years. LEE awarded Pastor Stephen Kaszar, of United Presbyterian Church, an Outstanding Support Award for the annual MLK Day celebration.

“He has been here for at least 14 years. He has always been here, and he has always supported us in anything we have done,” said LEE representative and event organizer Carmen Lee Peake said. “We are thankful that you have been around.”

Kaszar said he was grateful for the award and to be able to be a part of Monday’s celebration.

“Thank you for many years of being able to take part in this,” he said.

Before the event adjourned, Peake thanked the public for attending and said the new year will be bright in the village, so long as the community comes together.