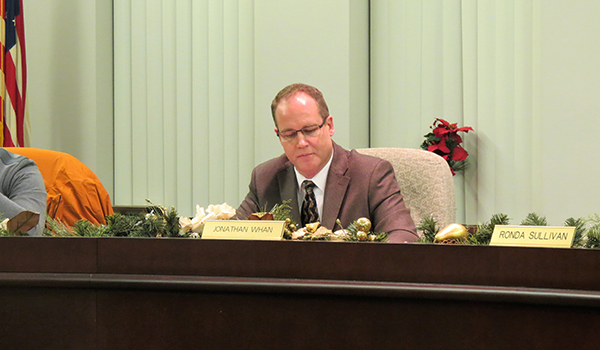 DOWAGIAC — From 6:52 p.m. Monday evening until 12:09 a.m. Tuesday, at least a dozen teachers and district parents sat in the hallways of Dowagiac City Hall, waiting on the decision of the school board.

About half of the teachers sat on the floor of the increasingly cold corridor, with one grading assignments and another cutting out multi-colored cards for an educational game. As the waiting dragged on, several wondered out loud how effective they would be teaching the following morning.

Finally, the door to the City Hall chamber opened, and the Dowagiac Union School Board reconvened its session to split a vote 3-3 on an overall “effective” evaluation rating for Superintendent Jonathan Whan, meaning the motion to approve the effective rating failed.

Board members Terry Groth, Carrie Freeman and Tracey Hatcher voted yes, while Ruth Ausra, Brent Brewer and School Board President Ronda Sullivan voted no. Absent was Treasurer Ron Jones. Jones was unable to attend, as he is recovering from an injury.

“Obviously, this is a tough one,” Sullivan said prior to the vote. “There was a lot of discussion on how we move forward. So, with that being said, regardless of what the next days bring, it will take all of us collectively to move forward with the district, whether Jonathan is here or not.”

Whan has been the target of teacher and public scrutiny in public comment sessions for several months, most notably for his role in this year’s lengthy teacher contract discussions. A three-year teacher contract was approved at the Jan. 10 regular school board meeting.

Per Whan’s contract, an effective or highly effective rating would mean a compensation raise and at least a one-year extension on his contract, which is currently set to expire June 30, 2024. With a rating of minimally effective or ineffective, the board could choose not to extend the contract. According to the contract, the board was supposed to have evaluated the superintendent prior to Dec. 31, 2021, but chose to prioritize the teacher contract negotiations first, according to Sullivan.

Prior to the closed-session evaluation, several former teachers and current district parents combined to read a statement prepared by Kristyn Badgero and Kristen Ausra, who both resigned as DUS teachers in 2021. The statement argued, using an evaluation tool linked on the school district website, why Whan should not receive an effective or highly effective rating.

“From a former teacher’s perspective, he is not approachable, not visible within our community and not a team player,” the statement said. “It seems pretty clear that Mr. Whan is far from effective, and it is time you, as a board, recognize that. If not, it might be time for us to find board members who do.”

In response to the criticism brought before the board, Whan said community members are entitled to their opinion.

“There were a lot of things said that I disagree with,” Whan said. “Some of those things, different aspects of it, I’m not saying they’re wrong, but it’s all perspective.”

Sullivan noted that the evaluation tool used by the board is slightly different than the one cited by Badgero, and the board has been looking into other options approved by the Michigan Association of School Boards. According to Badgero, the link on the school’s website has since been updated to the correct evaluation tool.

“We may be looking into [other] tools, but to change this tool for this evaluation … I don’t think it would have been legal,” Sullivan said. “We definitely know that we have an opportunity [to improve] in multiple areas, and we know that there are some things we have done well as a board through Jonathan.”

Board member Ausra also delivered an emotional address to the public prior to the vote.

“I know things haven’t been easy for everybody, and it hasn’t been easy for the board,” she said. “I know it’s going to take the community, staff, parents, teachers, staff, administration and the board. We’ve all got to pull together for the students, and we’ve got to find a way to move forward.”

After the meeting, Sullivan said the board would need to take some time and figure out what the next steps are, and Whan added these proceedings are all part of the process.

“They had a lot of good conversation that came out of the closed session so they could move forward,” Whan said. “It didn’t happen, so we’ll just have to continue the process.” Updates will be provided as they are released by the board.

Editor’s Note: This post has been updated to include comments from Superintendent Jonathan Whan.