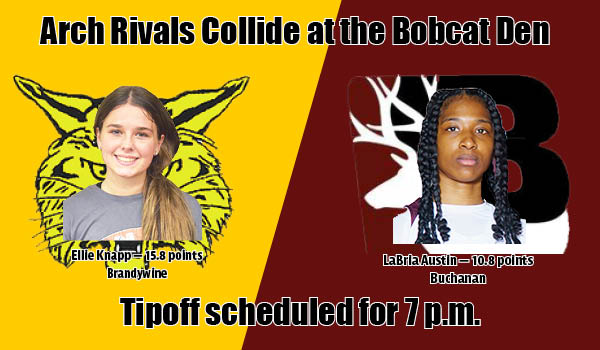 NILES — A busy week for the undefeated Buchanan girls basketball will culminate tonight with its BCS Red Division showdown with arch rival Brandywine.

The Bucks will put their 9-0 record on the line against the Bobcats, who are 7-1. Buchanan swept a pair of non-conference games this week from Constantine (60-34) and Bronson (57-44). Brandywine is looking to rebound from its first loss of the season, a 44-42 setback at the hands of Benton Harbor, last Friday night.

Buchanan and Brandywine are polar opposites when it comes to their rosters. The Bucks are experienced, even without Division 3 All-State center Faith Carson, who has played about one minute this season as she continues to recover from an ankle injury sustained in volleyball.

The Bobcats’ roster, meanwhile, is filled with freshmen and sophomores. Brandywine will also be short-handed tonight, as senior Haley Scott is out with a knee injury, and sophomore Tressa Hullinger is nursing an ankle injury.

Buchanan coach Gabe Miller said Carson was seeing her doctor Tuesday for an update on her injury. An MRI in December showed a small fracture, which has left her in a boot. Regardless of what came of Tuesday’s appointment, Miller does not believe she will be available for a few more weeks.

“We are finally getting healthy with the exception of Faith,” Miller said. “Having our team healthy and being able to get some quality practices in the last two weeks has been beneficial for our development and growth as a team.”

The No. 4-ranked Bucks are winning games by more than 20 points so far this season. They are led by sophomore LaBria Austin, who is averaging 10.8 points, three steals and 3.3 assists per game. Senior Alexa Burns has helped pick up the slack in the paint for Buchanan as she is averaging 8.3 rebounds and 5.9 points per game. Carson’s sister, Alyssa, has also helped fill in during her absence as the freshman is averaging 5.8 points and 7.1 rebounds per game.

Miller knows his team is going to have to deal with constant pressure no matter how many players the Bobcats dress tonight.

“The keys will be making sure we can handle their pressure and find some quality shots,” he said. “Additionally, defensively, we need to stay disciplined and are able to limit [Ellie] Knapp, [Miley] Young and [Kadence] Brumitt’s impact on the game on their offensive end. It will be important that we win the rebounding battle. A team as explosive as Brandywine will be difficult to beat any night. We don’t need to make it more challenging by giving them extra possessions. Lastly, we need to bring energy to the court. This game is a rivalry game. Brandywine is a great program. We have to be ready to manage the highs and lows that will certainly occur during those 32 minutes.”

Hood knows that his team, which dressed only seven players against the Tigers in its last game, will need to play to the best of its abilities tonight if it wants to continue Brandywine’s dominance over Buchanan.

Defensively, Brandywine is allowing 30.6 points per contest, and the Bucks 31.4 points a game.

“They are an experienced team that executes well in all facets of the game,” Hood said. “They have guards who can handle it and shoot it, with ‘bigs’ who are long, athletic and aggressive. We will need to perform at a high level for 32 minutes and be able to match their intensity. This is a game where our youth needs to play fearless and not dwell on mistakes. Mentality has to be ‘next play.’ We are currently banged up and need girls to rise up.”

Not only could the Bobcats be without two of their tallest players, they also have players who are returning to the lineup after battling through illness.

“We still have a couple girls trying to get their legs back after just returning this week from having COVID,” Hood said. “Having said that, it’s Buchanan, and regardless who dresses for Brandywine, we will be ready to play.”

The game is scheduled to begin at 7 p.m. in the Bobcat Den.