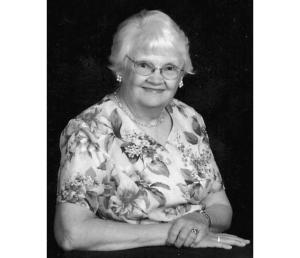 She was born to the late Jacob and Marie (Wise) Smrekar in Flint, Michigan on a beautiful fall day, Oct. 3, 1932.

Marie was no stranger to work, philanthropy and putting others before herself. She was a great example of what it meant to be a true part of her community. From the very beginning of her life, she enjoyed taking part and having leadership roles in whatever she was involved in. Marie graduated top ten of her class in 1950 from All Saints High School in Flint, Michigan, where she was born and raised. She also held the positions of class secretary, lead in the senior class stage production, and was a part of the prom queen’s court.

On Oct. 16, 1954, Marie married Robert Scott. The union of their lives brought them two loving daughters, Bridget and Barbara, and a son, Dennis. Family was a key aspect of Marie’s life.

She pursued a career as an accountant for General Motors Truck and Bus Division. After retiring from GM in 1987, Marie and her husband found their piece of heaven on Earth in Grayling, Michigan, where the couple called home until 2005 when her husband, Robert, passed away. While living in Grayling, Marie was involved with the local church, the VFW, and the Disabled American Veterans Auxiliary. She was the Eucharistic minister, the secretary and the financial assistant for the St. Mary’s Catholic Church in Grayling. Since she had more time to give outside of the church, Marie also held the president’s position for ten years at the local VFW. She was elected as the All-State President which allowed her to represent all the VFWs in District 11 from 1995-1998. After the loss of her husband, she moved to Niles and surrounded herself with her surviving family. She continued to hold many positions at the St. Mary’s Catholic Church parish in Niles and did so until her health prevented it. Her hobbies included gardening, crafting, and diving into a new book. Marie lived her life for the Lord and always did her best to learn, improve, and to give herself to others.

Preceding her in passing include her husband, Robert Scott; her son, Dennis and Connie Scott; her grandson, Jason Kessler; her parents, Jacob and Marie (Wise) Smrekar; and her dear siblings; Bernard and Maxine Smrekar, Dorothy and Richard Greig, Vivian and Paul Solomon.

Those wishing to make a memorial donation may donate to the St. Mary’s Catholic Church.