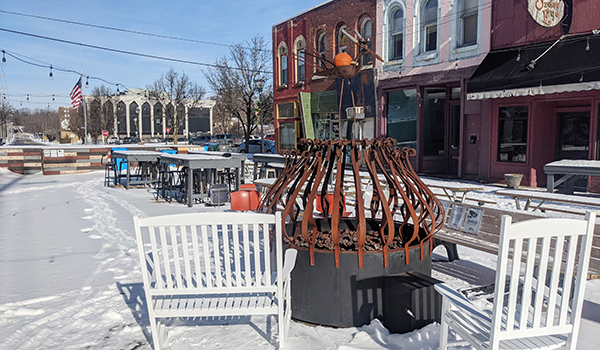 NILES — The Niles Outdoor Dining Experience has been a hot-button issue since its inception, and one city council member made a move to remove it from its location on N. Second Street.

During Monday’s Niles City Council meeting, Fourth Ward City Council Member John DiCostanzo made a surprise motion for the Downtown Development Authority to close the NODE following the completion of the Hunter Ice Festival and called for the DDA to be responsible for relocating, eliminating or finding a space for it that would be agreeable to a wider population of area business owners.

The motion failed with a 5-2 vote. DiCostanzo and Bill Weimer voted in favor of the motion.

DiCostanzo made the motion on the grounds that the council’s vote to approve the extension of the NODE on March 22, 2021, was based on misinformation. According to DiCostanzo, the council voted 5-2 in favor of extending the NODE through the end of April 2022 based on a recommendation by the DDA to extend the NODE and an understanding that all expenses be the responsibility of the DDA.

DiCostanzo alleged that the DDA’s recommendation to city council did not happen prior to the March 22 vote, and that a recommendation did not come until an April 7, 2021, DDA board meeting in which a motion was passed that did not match the council’s March 22 motion. According to DiCostanzo, the DDA’s motion included 120 hours of in-kind services to be provided by the city and costs associated with burying the gas lines being paid by the city.

Croteau responded to the allegations saying the DDA did not make a motion to ask for the extension of the NODE prior to the March 22 meeting because it was not entering into any sort of contract. However, minutes from a March 15 meeting show that the DDA came to a consensus that Second Street was the proper place for the NODE.

“When Councilman DiCostanzo raised this question back in March, I explained to Mayor Shelton and City Administrator Huff that no motion was made because it was simply a request to ask council to extend the length of time so we could see what the NODE might be able to become downtown,” she said. “We were not entering into any binding contract or agreeing to any financial responsibility at that point.”

While Croteau did say that the board motioned to ask to financially partner with the city at the April 7 special meeting, she added that the board revised its response to the council at its April 19 meeting and agreed unanimously to assume the expenses and responsibility for the NODE for a period of one year.

“We asked if they would extend [the NODE], and they did,” she said. “When it came to having financial responsibility, we absolutely have that in place because those are commitments the board is tied to.”

DiCostanzo said he believes Croteau’s response confirms the veracity of his comments Monday night that the city council was informed prior to the March 22 meeting that the DDA board had recommended the continuation of the NODE in its present location but that no such recommendation is documented in the DDA minutes.

“You business owners are represented by these DDA board members,” DiConstanzo said. “They’ve been aware since April that they didn’t agree to what the council approved at that meeting. [Mayor Nick Shelton] even mentioned that he was going to bring it back to the council. I haven’t seen it, and so I think at this point in time, the NODE is operating outside of the approved agreements of the city council and the DDA board. I see a lot of enthusiasm from you business owners coming here with their opinions that the NODE needs to be moved or closed. I don’t see a lot of enthusiasm coming in here to tell us that it should be kept and kept in the same location. It’s my opinion that we should close it.”

Fourth Ward Member Jessica Nelson was open to the concept of relocating the NODE but disagreed with the motion to close it so suddenly.

“I don’t think I can make an informed decision,” she said. “I do appreciate every business owner, citizen and everybody else that’s come out and spoken up for or against and the survey that’s been conducted and all the time that everybody’s put into it. I can totally be open to a decision to move it. I don’t like the idea of closing it and then having a gap because I think if it closes, it goes away. I think that everybody has said that they love the idea of the NODE and I don’t want to lose that momentum. I would love to see a plan where we have a transition, not just close it and see what happens. I’m all for moving it. I hear you loud and clear. I’m not against that; I support what people want, but I don’t want to just close it and lose momentum, so I can’t support that tonight.”

First Ward Council Member Gretchen Bertschy asked Huff if the council had the authority to direct the DDA to close the NODE, to which Huff replied “no.” To Huff’s knowledge, neither the city nor the DDA needs the other to formally submit a recommendation in order to move forward with an issue or project.

“I think we had the authority to permit the DDA to open it,” DiCostanzo said. “I think both of those motions should be negated because the council voted based on wrong information. We were told that the DDA board had recommended that the NODE will be made permanent, and that was not true.”