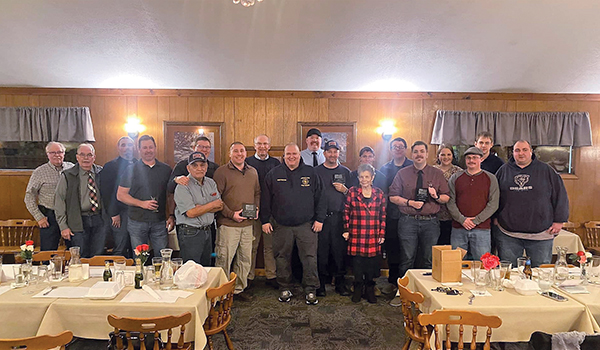 DOWAGIAC — Whether its members are brand new or have put in more than 45 years of service, one local fire department showed its appreciation for all of its members over the weekend.

Fire Chief Andy Hartman said, after not being able to host the event in 2020, it was important to get the group together and thank his volunteers, without whom there would not be a department.

The department consists of 25 firefighters, two honor firefighters and several support staff. Most members are working full-time at other jobs but still manage to be active and dedicated to the department.

“They’re just doing a ton of hours every month. … They do all this for nothing, no pay,” said Hartman, adding his department does everything from responding to emergency calls to filling pools. “Some fire departments forget what it’s like to truly have that family function and be together as a family, so it was nice to bring everyone together and have a good time.”

“The Salty Award is for someone that is not afraid to tell you the truth, and doesn’t necessarily care about what people think,” Hartman said. “That’s not a bad thing. He will always tell it how it is, whether a person has been here for years or not. … He responds to calls every day we have calls and is very active at the fire station and in the community.

James Bolt was given the Brotherhood Award, which goes to the person who is reliable and trustworthy for anyone in the department.

“That award is for the person who the guys and girls can always go to for help,” Hartman said. “They’re always around the station to help things, fix things and stuff like that.”

Safety Officer Ken Kennedy was awarded Firefighter of the Year, an award given to the person who has gone above and beyond for the department. When the department got a new truck, Kennedy spent the time to take off all the old decals and get it cleaned up. He also waxed and deep cleaned all the department trucks.

“He put in countless hours,” Hartman said. “For not getting paid a single dime and not getting any real benefit, he was there putting in hours every weekend for quite some time.”

The Rookie of the Year award went to William Hart, who Hartman said completed his hybrid fire training academy in just 10 weeks and has excelled.

“He was one of the top students,” Hartman said. “He puts in the work at the station and is always willing to help.”

The Broken Dreams award – a tongue-in-cheek award given to the member who is the most prone to breaking things – went to firefighter Matt Fecho.

Hartman, who has been chief since late 2020, also owns Pro Safety Innovations and previously worked at the Niles Township Fire Department. After nearly two decades working in emergency services, he said the people at the Indian Lake VFD have reminded him what it is like to be a part of a close-knit department.

“A lot has changed in the past year, and they have kind of reminded me of what it’s like to work for a truly volunteer fire department and have that brotherhood and sisterhood feeling again,” he said. “It really is like a family. They enjoy being together and putting in the work together.”