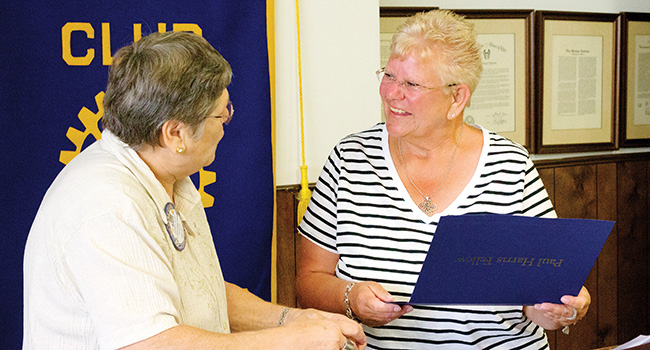 DOWAGIAC — The Greater Dowagiac Chamber of Commerce and the city of Dowagiac’s Downtown Development Authority announced on Tuesday the retirement of Program Director Vickie Phillipson.

Phillipson has been employed by both organizations for more than 31 years and has served Dowagiac with her work creating events that not only draw business to Dowagiac but serve as a driving force of commerce, as well as recreation and entertainment for community members.

The Dowagiac Chamber of Commerce organizes and hosts seven seasonal festivals, as well the Miss Dowagiac Scholarship Pageant, and provides its business members with opportunities for networking and professional development.

“All of Vickie’s work and effort through the years is evident in that Dowagiac has remained a vibrant community through many changes in industry and economy over the years,” said Kris Soenen, chamber president.  “While she has not done this alone, Vickie has definitely been a key component in Dowagiac’s development. Her untiring and unwavering dedication to this town is extraordinary.”

For the Downtown Development Authority, Phillipson has been instrumental in the development of programs such as the DDA’s facade incentive, the summer concert series and farm market, as well as serving as an active recruiter of potential business owners looking to locate their business in Dowagiac, officials said. The DDA’s mission is to foster an attractive and well-maintained community that attracts new business.

His response was always “Vickie’s Job Description is to fill all the storefronts downtown.”

“Filling storefronts is more than just showing buildings to potential business owners,” added City Manager Kevin Anderson. “It’s all about building a community that includes concerts, festivals, gathering spaces and gardens where the public is welcome and all can thrive. Vickie’s fingerprints are all over the projects that have been shaping our downtown into a place where the community lives together, conducts business together, and enjoys each other’s company together.”

Before working for the DDA and Chamber of Commerce, Phillipson worked for Leader Publications as an editor and writer.  When the DDA was created in the late-1980s, she found herself writing about the beginning of the central business district’s rebirth, as storefronts were renovated and streetscape construction began.

“During that time, the excitement was both contagious and inspiring,” Phillipson said. “Rather than continue writing about the redevelopment, I wanted to join the city’s team that was making it happen.”

During her 31 years as DDA and chamber of commerce program director, she found a niche for herself, showing storefronts available for lease or sale to prospective new and growing business owners.

“My greatest joy has been working with individuals, who came to us with the dream of owning their own business. Over the years, I have enjoyed helping countless prospects find their perfect location.”

One prospect, in particular, stands out in her mind. It was the late Steve Roll, who opened an art gallery in the Front Street building Phillipson now owns. Phillipson met Steve and his wife, Mary Rose, at Cabin Antiques, the seasonal antique store she owns at Sister Lakes.

“When Steve learned I worked for the city and chamber, he came to me, wanting to buy a downtown building. When he lost out on one storefront by only a few hours, he came back to me and said, ‘Find me a building with interior brick walls.’ And, so I did,” Phillipson said. “While the building was not on the market at the time, months earlier the previous building owner told me he would consider selling it.”

“The building at 126 S. Front St. is where Steve chased his final dreams,” Phillipson said.  “After spending a full winter renovating the main floor and later opening his art gallery, he passed away a few months later.”

Today, the same building is where Phillipson will be chasing her dreams into retirement.

“The Rolls knew my hope was to one day move my seasonal shop downtown,” she said.

During the height of the pandemic, Phillipson purchased the building that now houses her expanded store, Cottage Gallery.  As she retires from the city and chamber of commerce, her career path is coming full circle – from a reporter covering the redevelopment of Dowagiac’s central business district to joining the city’s team that was leading the development effort, to now being a part of the central business district she dedicated her career to.

Phillipson retires at the end of February. Soenen said those who are interested in the Dowagiac Chamber of Commerce Marketing and Event Coordinator position can see the job posting that will be posted at dowagiacchamber.com.