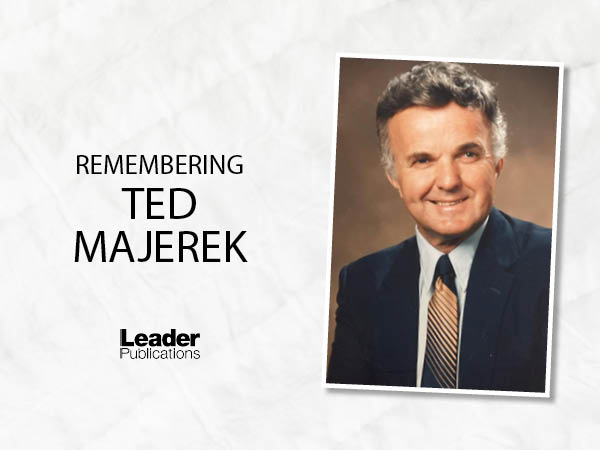 NILES — The Niles area is mourning the loss of a community pillar.

“[The weekend] was intense,” said Tom Majerek, the youngest of Ted’s eight children. “We’ve all been pretty healthy up until now. We’re doing pretty good.”

Born in Calumet City, Illinois on April 30, 1926, to John and Angeline Majerek, Ted enlisted in the Marine Corps after graduating from high school. He married his wife, Marie, at St. Andrew’s Catholic Church in 1949, with the couple recently celebrating 72 years of marriage.

They lived in South Bend and Calumet City before moving to Niles in 1957, where they raised their eight children: Tad, Michael, Jeanine, Jeffrey, Deborah, David, Anita and Thomas.

After moving to Niles, the Majereks purchased the Niles News Agency and Hallmark Store on Main Street. According to Tom, Majerek’s turned into a chain of more than 37 stores by 1997. Ted also owned Majerek’s Hallmark Stores and Michiana Delivery Service, while Marie owned the Four Flags Antique Mall.

Tom said his father was very committed to community service. He served on several fundraising committees and supported causes including the YMCA, Niles District Library and was, along with his wife, instrumental in starting the Four Flags Apple Festival. Ted also served as an adult leader for Boy Scouts of America, was active in the Four Flags Chamber of Commerce, Niles Board of Public Works, Niles-Buchanan Rotary Club, where he received the distinguished Paul Harris Fellowship.

“He had an endless amount of energy,” Tom said of his father. “He could be involved with almost any project he wanted. He always encouraged community involvement with his kids and gave us opportunities to seek that. Not only was he a good Christian and a family man, but he was also very involved with the community.”

Tom recalls many fond memories of his father, including a memory that is just a week old.

“It tells you how sharp he was right up to the end,” Tom said. “I got a new pair of glasses, and I came home and asked him what he thought of my glasses. He looks up at me and says ‘Oh, yeah I can see you better.’ He always had one-liners. He had a great sense of humor and was very giving. He could break the tension in the room with his humor. He was a very funny guy.”

While Majerek has moved on, his legacy lives on through his family and the numerous lives he has touched in Niles and beyond.