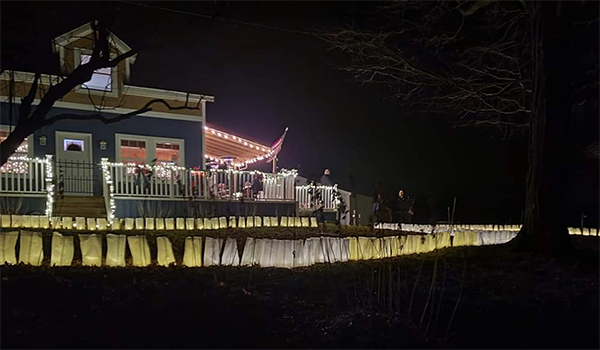 BANGOR TOWNSHIP, Mich. — After being shot in the line of duty years ago, one Pokagon Band citizen is making it his duty to honor every fallen police officer every year.

As part of a yearly Christmas Eve tradition, former Pokagon Tribal Police officer Steve Rider set up nearly 500 luminaries at his home in Bangor Township to honor every officer lost in the line of duty in 2021.

Rider, who also is the current government director for the Pokagon Band, was shot in the neck while on a traffic stop in Seattle, where he lived and worked for 27 years. For the last 11 years, he and his wife, Terri, have dedicated their entire Christmas Eve to remembering every local, county, state and federal officer who died this year.

“Where the bullet came in and out of the neck, I really came close to causing some major damage or death,” Rider said. “As my wife and I talked over the years about how lucky we are to be together over the holidays – or just every day in general – we started thinking about families that weren’t so lucky when their loved ones died.”

Rider said his wife came up with the idea of putting together a luminary in their honor while still living in Seattle, and the couple has continued the tradition ever since.

“It’s basically paying respect to the officers that passed that year, and just remembering the families and what they’re going through on their first Christmas without their loved one,” Rider said. “When we started, there were about 70, and the number has grown every year. … It’s quite the task.”

Rider said roughly half of the deaths this year were COVID-related, but they are deemed line of duty deaths, and the couple wanted to pay their respects. He added they also pay tribute to police K-9  officers lost.

Local officers from the Pokagon Band, Van Buren County and Cass County officers – including Sheriff Richard Behnke – have visited the luminary vigil throughout the years.

“There’s even a few families here that have made it their yearly tradition to bring their families out and pay their respects,” Rider said. “A lot of them were either law enforcement or related to law enforcement. Some of them are just people who really care. We’re quite happy that we’re about to see these people over and over every year.”

Rider said the event is intended to be time of quiet reflection, and written on each luminary are the fallen officer’s name, rank, agency and end of watch date.

“The sheer volume of bags this year is staggering,” Rider said. “When you put it all together in one place instead of throughout the year, it is very somber.”

The Riders moved to Michigan in 2017 to be closer to the Pokagon Band, which has supported the family throughout the years.

“We were thankful for all the Pokagons had done for us when we were out in Seattle,” Rider said. “We decided, instead of going straight to West Virginia or Pittsburgh to be closer to family, we would stop here in Michigan to try and get back to the drive in some meaningful way. We love it here and don’t plan on leaving.”