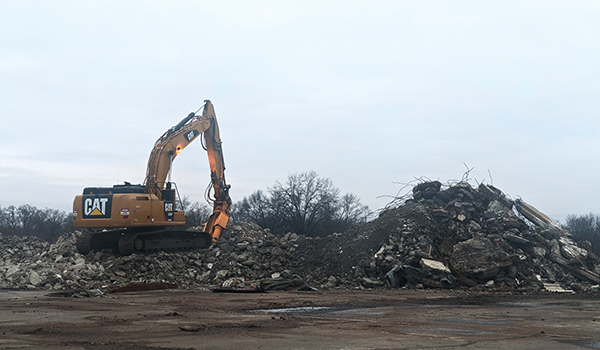 NILES — The year 2021 was an important one for Niles and City Administrator Ric Huff.

Huff, who became city administrator in 2011, said the city was feeling the impact of the Great Recession of 2008 when he came into the position.

According to Huff, there were estimates that it would take the city until 2048 to recover financially from The Great Recession. Thanks to millions of dollars in taxable value added to the city in recent years, instead of recovering in 2048, Niles recovered from the recession in 2021.

“We’ve made a remarkable recovery,” Huff said. “We’re still behind. In 2021, we’re generating revenue equal to what we were generating in 2008. It’s still a struggle trying to operate on our 2008 budget so to speak, but we recovered more than 20 years ahead of our estimate. I feel like we’re on the top of the world, but there’s always more room for growth and improvement. We’re never done.”

A major factor in the city’s turnaround was its commitment to construction, with Huff using Drive and Shine as an example.

“Construction has allowed us to gain momentum in the community,” he said. “Most people never would’ve guessed someone would make that type of investment in a car wash facility in our community. Entrepreneurs and developers seeing the potential in our community and making that investment.”

More than $20 million in taxable value has been added to the city in each of the past three years, per Huff.

“So many positive things are happening right now,” he said. “The interest in the community continues to grow. It’s an incredibly exciting time to be a city administrator.”

With 2021 in the rearview, Niles city officials are looking forward to continuing the trends and projects of the past year to create a robust 2022.

Huff said Niles experienced several accomplishments in 2021 and expects many of them to carry on into 2022.

Huff reeled off a laundry list of significant developments from this past year, including:

• The start of the National Standard Complex demolition project. Expected to be complete in 2022, Huff said the site will be turned into green space for neighborhood use for the time being.

• Indeck Niles Energy Center construction continued. Expected to be completed in March 2022, the energy center will generate 1,000 megawatts of energy, enough to power 635,000 homes and businesses through the use of clean natural gas and state-of-the-art technologies.

• Niles continues to see business interest from the marijuana industry. A new microbusiness is expected to open on S. 11th in early 2022, and Primitiv, a dispensary owned by former Detroit Lions Calvin Johnson and fellow Robert Sims Jr., is also expected to open. Huff added that another marijuana business, Oasis, is expected to begin construction next year on its S. 11th Street site.

• The Niles Inn is expected to be demolished in the coming weeks to be replaced by three new commercial buildings.

• In tastier news, Huff said that a Dunkin Donuts and Baskin Robbins location is planned to be built on S. 11th St. on the site of the former Michigan State Police post.