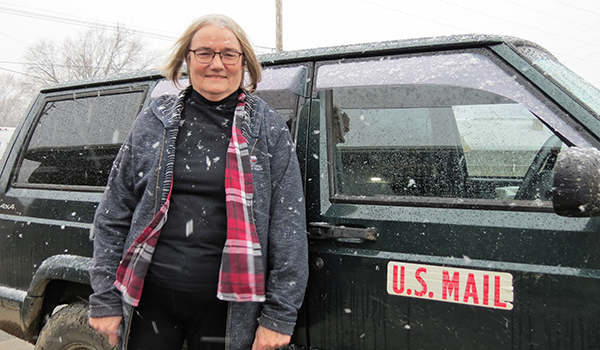 DOWAGIAC — After nearly four decades and hundreds of thousands of miles driven, one local woman has delivered her last piece of mail.

Rural Postal Carrier Barbara Ickes drove Route 1 for the last time Thursday after 37 years with the Dowagiac Post Office and is set to retire at the end of the day Friday.

Ickes was inspired to be a postal carrier by her father, Daniel Brosnan, who was appointed Postmaster of Dowagiac by President John F. Kennedy in 1963. He served 31 years, retiring in 1994.

“I always wanted to make sure I did things right and made him proud,” said Ickes, who has done everything from sweeping floors to working in the mailroom. “Being conscientious, just making sure the customers are taken care of and the mail gets out on time.”

According to Ickes, her father was plucked off the street and appointed postmaster without any prior experience. From 1836 to 1971, postmasters at larger post offices were appointed by the president, with the consent of the Senate, according to the U.S. Postal Service.

A graduate of Dowagiac High School and lifetime Dowagiac resident, Ickes said she was ready to retire a couple years ago, but after her husband, Robert, died in 2019, she decided she needed to keep going for a while.

“I needed a reason to get out of the house and do things,” said the 70-year-old Ickes, who has been driving the same route for 22 years.

Route 1 is 60 miles of mostly rural driving – including 11 miles of gravel road – and takes her as far east as Indian Lake Road in Pokagon Township, as far south as the Pokagon Highway and as far west as Oak Grove Road In La Grange Township.

Ickes is on her third postal vehicle – a mud-splattered Jeep – and said she has easily driven several hundred thousand miles, but enjoys all the time on the road.

“I just like driving,” said Ickes, who also has received her USPS Million Mile Award for 30 accumulated years driven without a preventable incident. “I’m out in the country, I’ve got a good route. I like all of it. … A lot of farmland, it’s just pretty – even in winter.”

While she enjoys the driving, Ickes said what she is going to miss the most is her coworkers, and they are going to miss her as well.

“We’re going to miss her dearly,” said coworker Mandy Harding. “There’s going to be an absolute river in here. We’re going to flood the place with tears. She started out as a small child and ended up as a wise, vintage adult. She’s taught us all, something or other along the way.”

Even in advance of her last day, Ickes remained focused on the work needing to be done. She was thinking of preparing her replacement, as well as telling her coworkers they are welcome to call and ask for help after she’s gone.

“I can’t just leave,” she said. “I’ve got to get everything ready for the next person to come in and take care of my people.”

Though the family line of postal workers is going to end after 68 combined years between Ickes and her father, she said the time has come to move on.