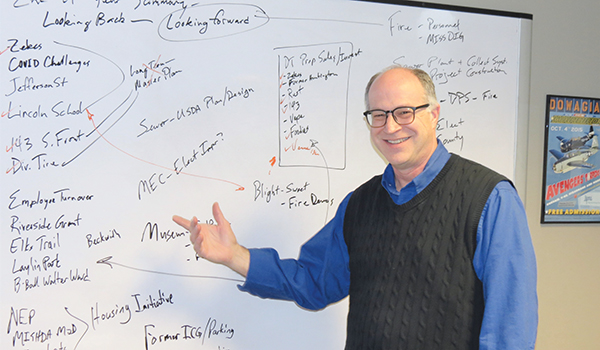 DOWAGIAC – The year 2021 was an eventful one for the city of Dowagiac.

From new businesses opening, to many parks projects and the repurposing of the site of a long-blighted building, Dowagiac City Manager Kevin Anderson discussed Tuesday what he was most proud of accomplishing as a city, as well as gave a glimpse of what is to come in 2022.

Anderson said the city went through a master plan review process in 2019 and identified four high-priority redevelopment projects. Number one on the list was the demolition and repurposing of the Former ICG Building with a partnership from the Dowagiac School District.

“We got the building torn down, took the floor and turned it into a parking lot,” Anderson said. “We removed the blight that was there and now that that’s the central part of the campus instead of a blighted building in the middle of it. So, we’re pretty excited about that one.”

Next was the project at 143 S. Front St., the current site of The Altus Apartment, a luxury short-term rental property that is now open for business. The third was the redevelopment of the former Lincoln School, 407 E. Division.

The fourth project was the former site of Division Tire, 313 E. Division. It is the current site of Salted Words, a shop where Tracy Saylor and her daughter, Robin Bowman, make word-inspired signs and sell them through Etsy.

“We really feel good about the major pieces of work that took place,” Anderson said.

Another project in the works is the future site of Barred Owl BBQ, at the former Zeke’s location. The owners of Propaganda Pizza bought the space, are renovating it and planning to open sometime next year.

“Ever since Zeke’s had gone out, there’s been a gaping hole in our downtown restaurants,” Anderson said. “What we have now are fine, but there is always room for another. I think these restauranteurs have proven themselves in other venues and other locations. They’ve got really strong local ties. … I think the community is ready to embrace them.”

Anderson said he hopes Barred Owl, along with Altus Apartment and new event space Venue 132 can work together to help revitalize the downtown, adding the former Foodies location is also undergoing renovations.

Anderson said the city is also proud of many parks projects, including financing the pavilion at the newly-remodeled public library.

“What they completed with the opening of the library is just magnificent,” he said. “We worked with them hand-in-hand to put the pavilion in on the end of the property. … We feel really good about an anchor in downtown. There’s a nice amount of green and a nice gathering place.”

Anderson said he was also excited about the progress at Beckwith Park, which now has its fireplace and tree installed. As events returned to downtown in 2021, the city continued its work on the park in between events.

“It’s still got some landscaping work to be done, but we feel good about another anchored gathering spot in downtown,” Anderson said. “To see that park used again, as part of the festivals and become a central piece of downtown, that brought a lot of joy to us because that’s really what was downtown pocket parks are all about.”

A future project Anderson is looking forward to is the Elks Trail, which will connect Schuur Park to Riverside Park along the Dowagiac Creek.

“We were able to work with the Elks to get an easement through the property,” Anderson said. “We just got word that we got the grant for that. … It’s going to be a terrific way for people to access the water of the creek.”

The city received a grant for $300,000 from the state for improvements to Riverside Park and will be putting another $105,000 of city money into ADA access to viewing to the water. They also have plans to apply for grants to renovate the newly-named Laylin Park to incorporate a trail system and repopulate the park with trees.

“To open up areas like that to the public is going to be huge,” Anderson said. “As a council, we worked through this to say, ‘What does this park look like in the future? What do people want in their neighborhood parks?’ … This is the kind of thing we could also take other parks in the community as well.”

Friends of the Museum

According to Anderson, the City has been operating the Dowagiac Area History Museum for about 10 years, and have worked with the museum this year to create a 501(c)(3) corporation independent of the city, which will allow people to contribute to an endowment fund for the museum.

“I think the dividends that this particular start can have over the next 10 to 15 years will be tremendous,” Anderson said. “It’s going to be a lot of fun in the next few years to see how that emerges and how that grows and develops. I think that can be a vehicle that drives long-term sustainability to the museum.”

There are many other projects the city is in the process of working on in 2022, including an upgrade to the power system, a SMART metering program, and a continuation of various affordable housing projects. One thing all the projects have in common, though, is written all over city materials.

“We have had on our letterhead, and we have had on our business cards forever the words ‘Creating tomorrow,’” Anderson said. “For us as an organization, from the elected officials to staff, that’s really kind of embedded in us. That’s what we’re always looking for. How do we make tomorrow? What do we do to invest, to keep the community vibrant, to keep it the kind of place people want to live and raise families? So that just undergirds everything we do. I had to chuckle the other day when I was looking at the business cards again, and I went, ‘you know what? I think we really believe that. We really try to act that way.”