Niles Inn property to be demolished for commercial development project 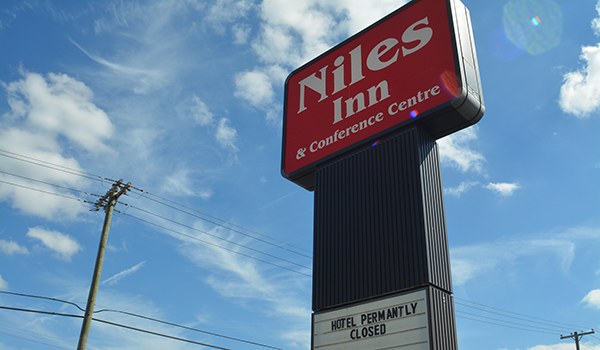 NILES — The site of a long-vacant business may soon be home to several businesses.

According to city administrator Ric Huff, a development company is in the process of purchasing The Niles Inn and Conference Center property from its current owners, with the intention of building three new commercial buildings — one an urgent care center and the other two as additional retail spaces with drive-thru capability — on the property after its demolition is completed.

During Monday’s city council meeting, the council moved to waive sealed bids and accept the quote of $28,403.00 to be charged to the Maintenance-Construction Work in Progress and the Underground Conduct & DEV Funds from Sunbelt Solomon Solutions of Solomon, Kansas for the three pad mount transformers for use at the upcoming construction project at the site of the Niles Inn and Conference Center.

The space has been closed since September 2016 after falling into disrepair and has been the site of numerous break-ins and fires in recent years. Last year, the owner had reached a tentative agreement with the city for demolition of the site, which Huff hopes to have completed near the first of the year.

Also Monday, the council accepted the proposed Opioid Settlement Agreement and authorizing the city administrator to digitally sign the Election and Release Document.

In August, Michigan Attorney General Dana Nessel signed on to a proposed multibillion-dollar national opioid settlement with Johnson & Johnson and the three largest pharmaceutical distributors in the country: Cardinal Health, McKesson, and AmerisourceBergen. Nessel urged eligible municipalities to register and voluntarily participate in settlements that would bring nearly $800 million to Michigan over 18 years.

The participation deadline for local governments to receive direct payments is Jan. 2, 2022. According to Nessel, the funding would “support ongoing prevention and treatment efforts across Michigan.”

By signing this document, Huff said that the city would be giving up its rights to any future litigation against the three entities.

“Is that a possibility? You’d have to say yes,” Huff said. “Almost anything is possible. The reality is that the city of Niles likely does not have the financial resources to take on something like that. That’s why multiple states went together to litigate them.”