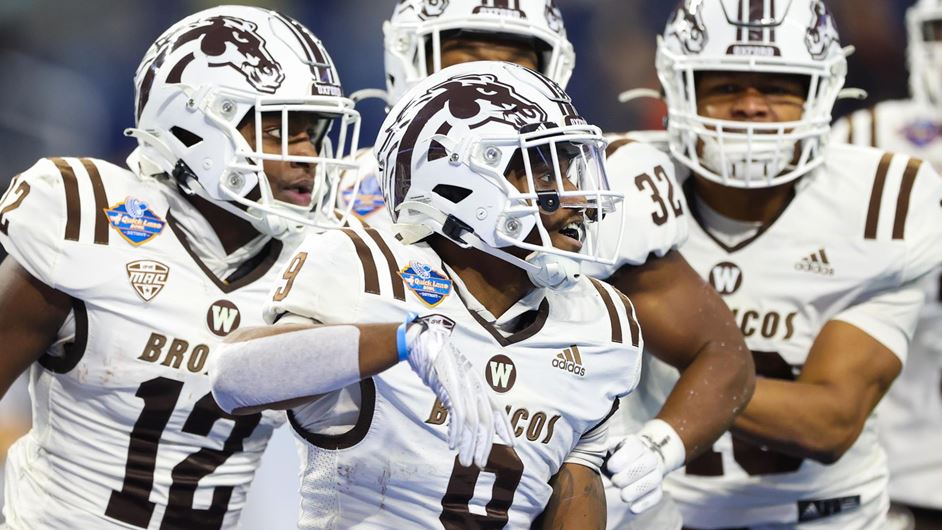 DETROIT — The Western Michigan University football team captured the second bowl victory in program history on Monday, knocking off Nevada 52-24 in the 2021 Quick Lane Bowl at Ford Field in Detroit.

The Broncos racked up 352 rushing yards on their way to their 52 points, both of which were program bowl records. The ground attack was led by Sean Tyler (146 yards) and Jaxson Kincaide (105), giving WMU a pair of 100-yard rushers in the same game for the first time since November of 2019. Tyler added a kickoff return touchdown and was named the game’s MVP. The kick return touchdown was the first for Western Michigan in its bowl history.

Through the air, Kaleb Eleby was 8-of-14 for 162 yards and two touchdowns. He also added a rushing score for Western Michigan (8-5).

On the defensive side, WMU set program bowl records for fewest yards allowed (242) and sacks (6). Ryan Selig recorded a team-high eight tackles, including a sack. Ali Fayad had five tackles and chipped in 1.5 sacks for the Broncos. Dorian Jackson sealed the victory with a fourth-quarter interception for Western Michigan.

Nevada (8-5) turned the contest’s opening drive into a field goal, but Tyler took the ensuing kickoff back 100 yards for a touchdown to put Western Michigan ahead, 7-3, in the opening five minutes.

The Broncos scored on their first four offensive possessions. On its first offensive drive, Eleby connected with Corey Crooms for a 74-yard touchdown strike, giving WMU a 14-3 advantage at the end of the first quarter.

A field goal by Parker Sampson early in the second quarter pushed the Western Michigan advantage to 17-3, but the Wolf Pack responded with a touchdown to cut the margin back to seven at the 11:15 mark.

The Broncos answered with back-to-back touchdown drives. Eleby hit Brett Borske for a 20-yard score, and on the next possession, Kincaide raced in from seven yards out to boost WMU’s lead to 31-10, an advantage the Broncos took into the halftime locker room.

Western Michigan kept the momentum going after halftime, as Tyler had a 70-yard run on WMU’s first possession of the third quarter to set up Eleby for a one-yard touchdown plunge. Nevada added a touchdown in the waning moments of the period to send the game into the fourth quarter with the Broncos ahead, 38-17.

Kincaide found the end zone for a second time near the midway point of the fourth quarter, and Trae Allen scored his first career touchdown in the final moments to put an exclamation point on the victory for the Broncos.