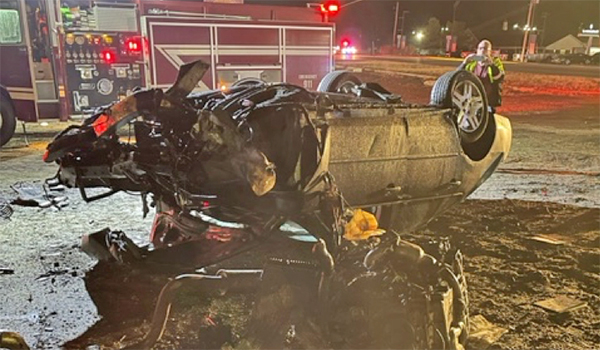 NILES TOWNSHIP — A Niles woman was transported to the hospital following a Christmas day crash, according to the Berrien County Sheriff’s Office.

At approximately 8:07 p.m. Saturday, first responders were dispatched to a priority call of a single-car traffic crash with injuries on S. 11th Street near Bertrand Road in Niles Township. The driver of the vehicle, a 60-year-old female from Niles, was entrapped.

The Niles Township Fire Department utilized the Jaws of Life to free the driver from the wreckage. She was subsequently transported by ambulance to an area hospital with serious injuries.

Deputies investigating at the scene determined that the vehicle had been driving southbound on S. 11th Street when it left the roadway to the right, went airborne, struck a utility pole, and then rolled before coming to rest on its roof. The collision damaged the utility pole resulting in power lines down in the roadway. The crash resulted in the area losing power, but as of 10:30 p.m. Saturday, crews were on scene to repair the damage.

The incident remains under investigation by the Berrien County Sheriff’s Office. Alcohol or drugs are not believed to be factors in this collision, however, excessive speed is suspected as a contributing factor, officers reported.