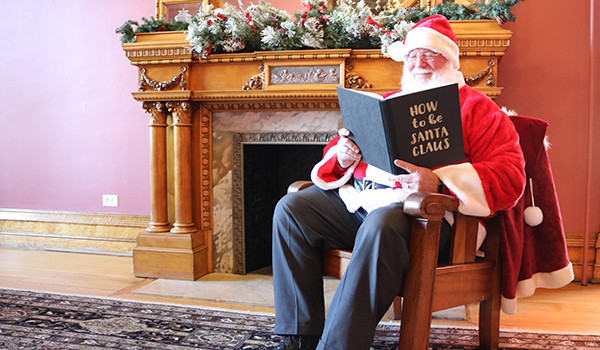 He is making a list, and he is checking it twice.

After spending 17 years as the athletic director of Brandywine High School, Stratton is preparing for his next role as a professional Santa Claus.

The Santa seeds were first planted when Stratton stumbled upon an association of real-beard Santas a few years ago. After talking to professional Santas, the idea of joining their ranks was too good to pass up.

“It’s something I’ve thought about over the last 20 years or so,” Stratton said. “I would be in a mall or someplace during Christmas time and there would be a Santa there, and I would think, ‘maybe I can do that.’”

Upon retiring, Stratton, of Cassopolis, began to grow out his beard. At 6 feet, 2 inches and 355 pounds, and with bright white hair, Stratton’s build and facial hair closely matches what most people think of when they envision Santa Claus.

“Being a redhead, I knew when I got older I was going to have white hair,” he said. “All the pictures I saw growing up were of Santa Claus with his white beard. I thought, ‘I am kind of big, and if I can grow a beard, and it looks right, it would be pretty cool.’ The length is a little short. You don’t want it to be too long or too short. The little kids have to have enough beard to grab.”

Stratton has spent the past several months preparing for the role of Santa Claus. As a lifelong teacher and student, the endeavor is something he takes seriously.

“I have a lot to learn,” Stratton admitted. “It’s not something you just do. You have to be prepared for a lot of things. Even now, I’m still in awe of the guys that do this and do it well.”

Being a Santa means being peppered with unexpected questions and statements from children. After working with children for more than 40 years, Stratton thinks he is well prepared for children asking him off the wall questions, such as asking Santa for a Red Ryder BB gun.

“I have been told you have to be quick on your feet,” Stratton said. “I can definitely see that coming. Having been a teacher, I have an advantage. It’s not something I’m unfamiliar with.”

While studying the art of the Santa Claus, Stratton came across aspects of the role he never would have considered
before.

“You have to be able to market yourself,” he said. “Are you willing to travel? What shade of red will your suit be? I bought a pair of glasses that are going to match my suit better than the glasses I’m wearing now. You look for the smallest details and try to make it look good for the little kids. That’s what it’s all about.”

Stratton’s drive to be a great Santa dates back to his days as an athlete in high school.

“I strived to be the best football player and wrestler I can be,” Stratton said. “That includes getting as much information as possible. How does Santa hold his head? How does he sit? His ‘ho ho ho?’ Those aren’t things you can just do. You have to be able to feel.”

Being a Santa is hard work, but it does have its perks. Stratton has already thought about what his cookie of preference would be to pair with his glass of milk.

“Anything with chocolate will have me hooked,” he said. “I do like sugar cookies very much — any type kids would set out would be good with me. I’m not picky when it comes to that.”

Santa’s world-renowned roster of reindeer allows him to travel to billions of homes around the world in one night. Each reindeer plays an important role, but Stratton has a favorite, nonetheless.

“Rudolph,” Stratton proclaimed. “I want leadership. He’s a leader, and I need him to lead me where I need to go.”

Stratton’s first gig as Santa Claus will be an upcoming party for a large family. He anticipates more than 100 children will be in attendance. His wife, Marcia, will be joining him as Mrs. Claus.

“That’s a good way to get your feet wet,” Stratton said. “We’re going to have fun with it.”

The Charles W. Howard Santa Claus School in Midland, Michigan, has been in existence since 1937 and is one of the most prominent Santa schools in the world. Stratton hopes to attend one day as he continues his journey to the North Pole and beyond.

“I’ve always loved coaching and working with kids,” he said. “It’s something I’ve always done. This is a natural progression. I’m not one of those guys who wants to sit in a rocking chair and do nothing. If I can sit with a kid and make them laugh, that’s what I’m gonna try to do.”