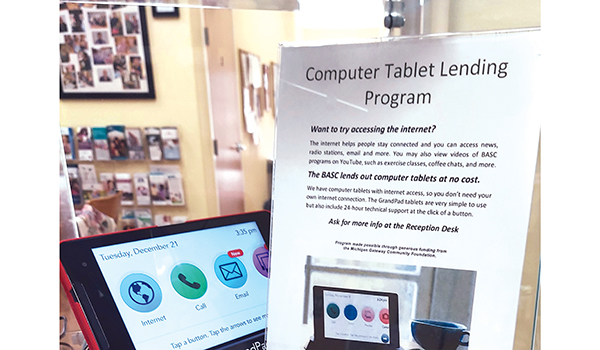 BUCHANAN — A local senior center is doing its best to keep its clientele connected amid the pandemic.

BASC executive director Adam Burck said the program was born from the desire to keep seniors without internet connections engaged in the senior center’s programming during the pandemic.

“During the pandemic, when we were completely closed, we started putting our programming online,” he said. “A lot of our seniors could not access the internet. It illustrated the need for providing access to our seniors. Some of them live in places where they could not get cable internet.”

After receiving a grant from the Michigan Gateway Community Foundation in the spring, the BASC purchased GrandPad tablets that include a built-in Verizon data connection and 24/7 helpline with customer service representatives specifically trained to work with seniors.

“It’s specifically designed for seniors,” Burck said. “They’re used to working with seniors. It’s a simple interface, as well. It made a lot of sense to go with that option.”

Burck said seniors interested in the program can check out a tablet at the front test for one month at a time.

“The lack of in-person programming meant that many of our seniors couldn’t get any programming because they didn’t have internet,” he said. “Isolation was really hard for a lot of our seniors and this is one way to deal with that. They can do Zoom calls on it and things like that to meet with family.”

The BASC first received the tablets eight months ago, but according to Burck, it took a while for the program to catch on.

“We had surveyed our community beforehand and they expressed interest in it,” he said. “Once we had them, it didn’t seem like there was much traction. We started having monthly classes on how to use it and that seemed to help get interest going. They can surf the internet, and we have the senior center’s YouTube channel on there. They also have radio stations and different music collections. It has a lot of stuff to occupy the minds and time of the people using it.”

Burck hopes seniors in the Buchanan community take advantage of the tablet program.

“I’m surprised the interest took so long to get going,” he said. “I think it demonstrates the challenge with digital programs for seniors. It’s not just access to the internet. It’s also habit and other things. … We are trying to get the word out to the broader community about this program that we feel can be a benefit to many.”