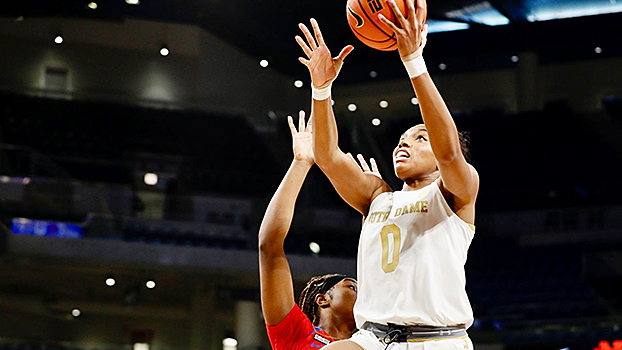 CHICAGO — The No. 20-Notre Dame women’s basketball squad won the track meet against the No. 1 offense in the country in DePaul, outpacing the Blue Demons by the score of 91-86.

The victory marked Notre Dame’s first NET top-50 win of the year and evened the series in Chicago against DePaul (11-3) at 11-11.

DePaul got off to a hot start, shooting 6-of-8 from the field, but Notre Dame weathered the early offensive flurry and settled in. Anaya Peoples got the Irish offense going with seven points in the first eight minutes of the game. Maya Dodson followed right behind with six points. The Irish tallied 16 points in the paint but trailed after one, 22-20.

In the second quarter, the Irish outscored the Blue Demons 24-11. Westbeld tallied six of the team’s first eight points. The Irish recorded a 7-0 run over 2:26 midway through the quarter, while the defense held DePaul to without a field goal from 7:29 to 3:04.

Westbeld finished the quarter with 10 points while Miles supplied six, including a buzzer-beating three to give the Irish a 44-33 lead. Notre Dame shot 9-of-18 in the second compared to DePaul’s 4-of-15.

DePaul started the third red hot, converting nine of its first 11 shots. By the 4:29 media timeout, the Blue Demons cut the Irish lead to one possession at 57-54 after a four-point play.

However, the Irish took the punch and dished one back, outscoring DePaul 15-5 for the remainder of the quarter, building the lead back to 72-61. Miles, Westbeld and Dodson scored all but two of the team’s 28 points.

DePaul started the fourth quarter on an 11-2 scoring spree, which extended into an 18-6 advantage. Fast forward to 5:16 remaining and the Irish lead evaporated to one point, 78-77.

Enter Dodson, who ultimately scored 10 straight points starting at the 4:46 mark. Then, when Westbeld was at the free-throw line, Dodson was able to tip an offensive board back to Westbeld who added to the Irish lead and iced the game at 91-86.

The Irish will get to enjoy a few days at home for the holidays before officially kicking off the full slate of ACC play. Up first, a road trip out east, starting with Virginia Dec. 30, then No. 16 Duke on Jan. 2.