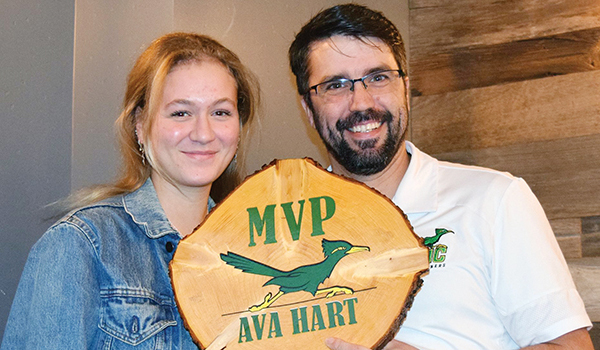 DOWAGIAC — Southwestern Michigan College’s cross country team celebrated its historic return to intercollegiate athletics after a 25-year absence Dec. 11 at a year-end banquet with their families.

Head Coach Zac Sartori announced Alec Saylor as the men’s MVP and Ava Hart as the women’s MVP. In addition, Sartori named Sam Loomis and Abby Lee as most improved.

The Roadrunners competed at November’s NJCAA cross country championship in Richmond, Va., with the men achieving 22nd and the women 23rd.

Saylor, of Dowagiac, “put in mile after mile — sometimes more than I asked,” Sartori said. “This guy shows up at every practice, works hard and pushes his teammates to work hard. He supported them out on the race course, in the field when they’re practicing and in their residence hall. We would have had a much different season if he hadn’t been around. He was our top runner at nationals and always in the top two. He kept himself healthy and raced every single race for us. I’m so proud of this young man.”

Sartori recruited Hart as she was ordering Starbucks during orientation. He learned she had played lacrosse in Oak Park, Illinois.

“In our first meet, she was the second junior-college runner in the race,” he said. “I thought to myself, we might have something here. She was completely new to the sport, with no idea how to race or to train. But she came out every day and worked hard. She was our top runner every single meet she was able to run and is always positive and a good teammate.”

Loomis, from Otsego, was the first runner to commit to the comeback. The music major auditions at the end of January for Washington State for music education.

“He had an awakening as the season progressed and pushed harder. By the end of the season, he had improved by seven minutes. That’s pretty awesome,” Sartori said.

Lee, of Elkhart, “struggled for most of the season,” Sartori said. “She had a lot on her plate, but she’s tough. She had some late nights given her responsibilities as a housing resident assistant, coupled with early-morning practices, which made it difficult, but she got better every meet as she found her confidence,” shaving almost four minutes from her times.

Plaques were handmade by the coach’s father from sections sliced from one of his grandfather’s pine trees in Illinois.

“We had people come out after a few years of being away from the sport,” he said, “and people who came out and ran for the first time ever. It made for an amazing season, and, as (Athletic Director Rodell) Davis said, “a historic season,” Davis said his goal is for SMC to produce Academic All-Americans.

“Being the first in 25 years is huge,” Sartori said. “I really appreciated the opportunity to be your coach. As many of you know, I started this journey about 10 years ago, trying to find my dream job, and I really could not be happier with where I landed. We love this place. I love you guys and all the amazing support your families give. Nothing makes me prouder of my athletes than when they can show their parents what they’ve done. So much of my job is instilling confidence and making them feel like they’re good at what they do. But moms and dads are the real people who give them that sense of accomplishment.”