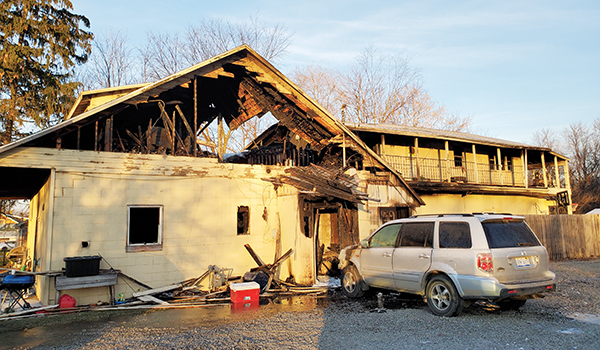 NILES — Several area families have been left without a home following an apartment complex fire Sunday in the city of Niles.

Fire units from Niles City and Niles Township were called to the 400 block of Fort Street in Niles at 3:26 p.m. Sunday for a structure fire at a four-unit apartment complex, according to City of Niles Fire Captain Don Wise.

Firefighters were able to get the fire under control around 5 p.m., but units returned to the scene around 10 p.m. to extinguish a small rekindle. The scene was fully cleared around midnight Sunday.

The cause of the fire is unknown at this time, as an investigation is ongoing. Wise said the fire does not appear to be suspicious.

All residents of the apartment complex were evacuated safely from the building, but several pets, including dogs, a cat and a lizard, were killed in the blaze.

Wise said the building is a total loss.

“The occupants lost pretty much everything they had,” Wise said. “With it being this close to Christmas, it’s tough enough when you lose everything, and now they have to find new housing, which can be hard in this market right now.”

CJ’s Pizza and Subs, 114 N. Third St., is collecting donations, including clothing, necessities and children’s Christmas gifts, for the families impacted by the fire. A full list of items needed can be found on the CJ’s Pizza & Subs Facebook page. Those interested can drop off donations from 4 to 8 p.m. Wednesdays and Thursdays and 4 to 9 p.m. Fridays and Saturdays.

Wise said his thoughts are with the families affected by the fire. He added that he wants to remind residents to check their smoke detectors regularly to ensure they are functioning properly.

When firefighters were on Sunday’s scene, Wise said they heard just one working smoke detector. As the nature of the fire was hidden in the walls, leaving occupants just moments to evacuate by the time they were made aware of the fire, he said the outcome likely would have been worse had residents not already been awake and alert at the time of the fire.

“If this fire would have been at 3 a.m. in the morning, we could have had a totally different situation than everyone getting out safely,” Wise said. “We should have heard multiple smoke alarms going off in that building. … It’s just a good reminder to make sure your smoke detectors are working, because you never know.”