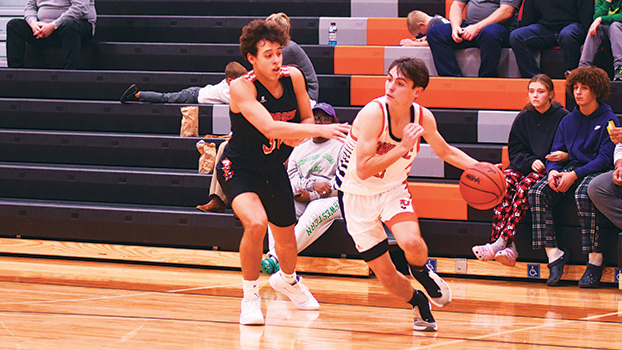 DOWAGIAC — It was a tough week for the Dowagiac boys and girls basketball teams.

The Chieftains were swept by Plainwell and Sturgis in both non-divisional and Wolverine South contests.

On Thursday night, the Chieftain boys basketball team dropped its second consecutive game as visiting Sturgis 52-36, while the Dowagiac girls remained winless following its 33-28 loss to the Trojans in overtime.

Early foul trouble kept the Chieftains from playing the style of basketball that it wanted to against the visiting Trojans.

Dowagiac (1-2, 0-1 Wolverine South) led 12-7 after one quarter, but when the fouls started to mount and it had to go to its already shortened bench, Sturgis came roaring back.

The Chieftains were unable to recover in the second half.

“We started off pretty good, but we just couldn’t get an offensive rhythm going,” said Dowagiac Coach Danum Hunt. “We were able to keep the game up-tempo, but once our ability to play up-tempo was affected by foul trouble. That kind of threw off our rhythm, and we struggled for the rest of the night.”

In a game Dowagiac had marked as one it could possibly win, visiting Sturgis had other ideas.

The Trojans outscored Dowagiac 33-21 over the final three quarters, and overtime, to pull out the Wolverine Conference South victory Thursday night.

The Chieftains (0-6, 0-1 Wolverine South)  led 7-0 after one quarter, but a 9-2 second-quarter scoring difference allowed Sturgis to knot the game at 9-9.

The two teams battled back and forth throughout the second half. Dowagiac had to rally in the closing stages of the fourth quarter to force overtime after the two teams finished regulation deadlocked at 26-26.