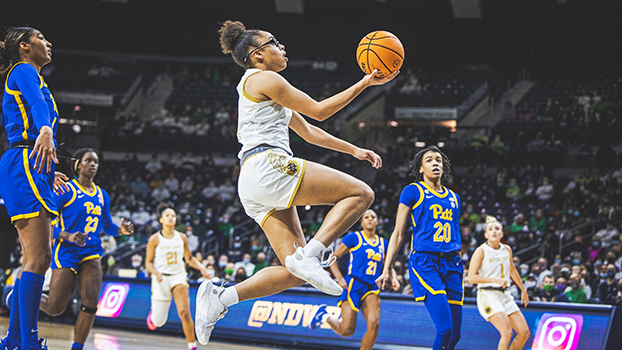 Notre Dame improved to 2-0 in ACC play with an 85-59 rout of visiting Pittsburgh Sunday afternoon. (Photo courtesy the University of Notre Dame)

NOTRE DAME, Ind. — The No. 21-ranked Notre Dame women’s basketball squad will enjoy a 2-0 start in ACC standings when the league schedule ramps up after the holiday season.

Olivia Miles lit up the stat sheet with 21 points, 11 assists, six rebounds and a career-high six steals. She also had just one turnover in 31 minutes of play.

As a result, Miles notched her third double-double over the last five games and fifth overall on the year. In addition, Miles is the fourth Irish all-time to join the 20-point, 10-assist club, etching her name alongside Skylar Diggins-Smith, Jackie Young and Marina Mabrey.

“Really ecstatic with the way we started. We focused on bringing the energy today and we accomplished a lot of our team goals we set. Incredible contributions from so many people,” Karen & Kevin Keyes Family head coach Niele Ivey said.

Notre Dame started the game on a 10-0 run over the first 3:28, as Miles, Westbeld, Dodson and Citron all scored. The Irish ended the quarter up 17-10, primarily thanks to a hot start from Citron who tallied eight points on 3-of-4 shooting.

The Irish got hot from beyond the arc in the second quarter, where they converted 5-of-10 from three. In fact, the home squad recorded a 13-2 scoring spree over a three-minute stretch in which Westbeld, Miles and Mabrey all hit from deep.

Ultimately, the Irish took a 42-24 lead into the locker room at the break. Both of Notre Dame’s freshmen, Miles and Citron, were in double figures with 12 and 11 points, respectively. As a team, the Irish were 8-of-17 from 3-point range.

The third quarter featured a 14-0 Irish run which spanned three minutes. In that run, Brunelle recorded a stretch in which she scored six straight. In fact, Brunelle scored 10 points in the quarter on 4-of-5 shooting, lifting the Irish to a 30-point advantage heading into the final period up 73-43.

Notre Dame closed out the game with the 85-59 win. Nat Marshall added five of her eight points in the fourth. The Irish finished with 11 made three-pointers and 17 steals – both season highs. Irish also registered 22 assists on 30 made field goals.

Notre Dame will compete in its last non-conference matchup Wednesday when the Irish travel to the Windy City to take on DePaul. That contest will air nationally on FS1 at 8:30 p.m.