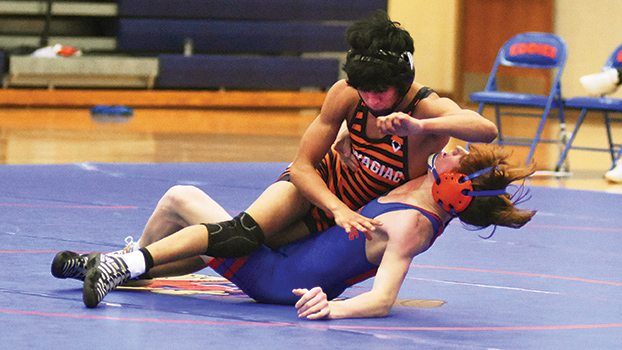 The Edwardsburg wresting team defeated Dowagiac 48-18 in the Wolverine Conference opener for both teams Wednesday night. It was the first loss of the season for the Chieftains. (Leader photo/SCOTT NOVAK)

EDWARDSBURG — An early-season Wolverine Conference wrestling showdown between two contenders did not go according to plan Wednesday.

The season-opening conference dual between visiting Dowagiac and Edwardsburg was expected to be a hard-fought battle. In the end, the Eddies cruised to a 48-18 win over the Chieftains, who lost for the first time in the 2021-22 season.

“We did not wrestle well,” said Dowagiac Coach Colin Burandt, whose team is the co-defending league champion. “We came out flat. Again, we are not sticking to the right technique, and we are trying to score too fast. We need to focus on slowing the match down and going out there and actually wrestling instead of rolling around.”

Veteran Edwardsburg Coach Jesse Becraft, whose Eddies did not get to wrestle the Chieftains last season due to COVID, was glad to have nearly his entire lineup in the right weight classes.

“We are getting closer,” he said. “It was a huge improvement from last Wednesday to today, I can say that. Our fight was better. We did the right things more often. Last week, we were a little flat. We got punched in the mouth, and we just let them have it.”

The Chieftains (7-1, 0-1 Wolverine) stopped the Eddies’ winning streak at 103 when A.J. Munson earned a victory by decision. Edwardsburg would win five of the next six weight classes to seal the victory.

During that span, the lone Dowagiac win came at 125-pounds where Jordan Simpson picked up a pin. The Chieftains’ other win came at 160 with Brayan Paredes, who also won by a pin.

The host Wildcats defeated Niles 61-15, while the Vikings rebounded to defeat Sturgis 56-12.

Winning two matches for Niles were Carson Rachels (130) and Ezra Vance (152). Winning their lone matches of the night was Dan Gaya (215).

NILES — The Bobcats are still looking for their first win of the season after being swept by Union City (53-24) and Decatur (53-30) at its home quad Wednesday.

The Rangers split a pair of non-conference matches in their season-opener Wednesday.

Cassopolis defeated Bloomingdale 24-18, but was shut out by Bronson 24-0.

Winning for the Rangers against the Cardinals were D.J. Rimpson, Jaren Waldschmidt, Galen Stahl and Jermaine Williams. All four wrestlers won by pins.

The Vikings blanked the Rangers by pinning every one of their opponents.