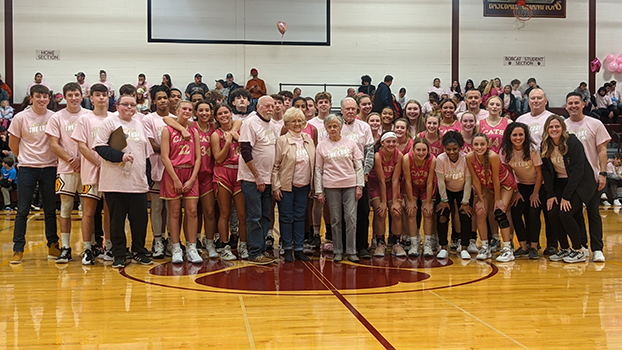 Over the past 13 years, the Brandywine basketball programs have used the annual Cats For a Cause event to raise more than $30,000 for the Brian Parker Memorial Foundation. The foundation is a nonprofit organization created to honor Brian Parker, who died of leukemia in 1980 at the age of 14. (Leader photo/MAXWELL HARDEN)

NILES — The Brandywine girls and boys basketball teams played ball for a cause Friday night.

The Bobcats hosted their annual Cats For a Cure doubleheader, with the girls defeating Berrien Springs 78-23 before the boys dropped a 62-52 decision to the Shamrocks.

The Brandywine girls basketball team made sure its BCS Athletic Conference Red Division opener was over not long after it began. The Bobcats raced out to a 27-7 first-quarter lead and never looked back in a 55-point rout.

Brandywine took a 45-16 lead into halftime.

“I’m really proud of this group,” said Brandywine coach Josh Hood. “We have 15 varsity girls and they work really, really hard. To be this young and to have the success that we’ve had so far says a lot about these girls. Basketball is a big thing here at Brandywine and they take a lot of pride in that and work really hard.”

For the boys, Brandywine’s comeback bid came up short in the fourth quarter in a 62-52 loss to rival Berrien Springs.

Trailing 44-33 after the third quarter, the Bobcats used a 9-0 run to cut the deficit to 44-42 before Berrien Springs’ Brody Brewer converted a 5-point play to put the Shamrocks up 49-42.

Brewer was fouled by Michael Palmer as he scored down low and went to the line to shoot free throws. Palmer was then hit with a technical foul, which gave Brewer a total of three free throws, which he then made.

In a matter of seconds, the Shamrocks were up 49-42 and Palmer fouled out of the game. Brandywine would never get closer than five.

“When we make it run, we can’t control what the official is going to call,” said Brandywine boys coach Nathan Knapp. “Even if you didn’t foul, you give the ball to the official and you walk away. That technical really hurt us.”

Berrien’s James York led all scorers with 23 points and Byron Tate added 14 while Brewer had eight.

Nathaniel Orr V had 16 to lead the Bobcats, while Jeramiah Palmer and Carson Palmer scored 14 and 12 points, respectively.

The Bobcats (1-2, 0-1 BCS Red) will try to right the ship and prepare for a road matchup with Bridgman Tuesday night.

“We’ll do what we have to do to get better,” Knapp said. “But instead of taking whoopings, we’d like to win these games and get better.”

Cats For a Cause

Over the past 13 years, the Brandywine basketball programs have used the annual  Cats For a Cause event to raise more than $30,000 for the Brian Parker Memorial Foundation.

The foundation is a nonprofit organization created to honor Brian Parker, who died of leukemia in 1980 at the age of 14.

“I was proud of the Brandywine community and the boys and girls programs for raising money for a great cause,” Hood said. “I’m proud of the kids for the wins, but this is probably the things we do as a program that we’re most proud of. What the Bryant Parker Foundation does for Southwest, Michigan is amazing, and we’re glad to be a small piece of the big things that they do.”