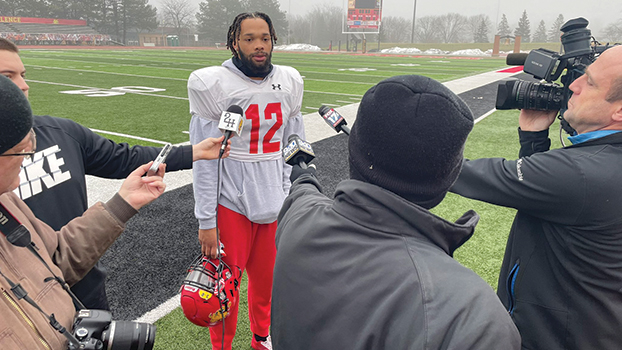 MCKINNEY, TX — A pair of former area high school football standouts are on the cusp of making history.

The 13-0 Bulldogs punched their ticket to the Division II national championship game with a 55-7 victory over Shepherd last week in the semifinal and are preparing to face Valdosta State (Georgia) in the national title game Saturday, at the McKinney ISD Stadium in McKinney, Texas. Kickoff is set for 9 p.m., with live television coverage on ESPNU.

Against Shepherd, Murphy had five tackles and two sacks, while Hunt-Thompson had both a receiving and rushing touchdown.

The pair knows it will have to play well to defeat the 12-1 Blazers, who edged the Colorado School of Mines 34-31 in the other semifinal game. The game will be a rematch of the 2018 national championship game, which saw the Blazers eke out a 49-47 victory.

“My mindset is the job’s not done,” Murphy said. “We just need to stay focused and try to continue to play the type of football we play. I truly believe playing 60 minutes of Ferris State football will get us there. We’re focusing on us and nobody else and trying to stay locked in.”

Murphy and the Ferris State defense will be tasked with stopping a VSU offense putting up 43.23 points per game with a balanced offensive attack averaging 267 yards rushing and 260.23 passing. VSU features a one-two punch at running back in Seth McGill and Jamar Thompkins, who rushed for 1,238 yards and 14 touchdowns and 979 yards and nine touchdowns, respectively.

Blazers quarterback Ivory Durham has completed 230 of 372 passes for 3,267 yards and 30 touchdowns compared to nine interceptions while adding 1,007 yards and 13 touchdowns on the ground.

On defense, Nick Moss leads the team in tackles with 115 and Arrington Dullin and Brian Williams each have 5.5 sacks. Taurus Dotson has a team-high three interceptions.

“They’re an explosive team,” Murphy said. “They’re very well-coached. We have to try to stop the run and focus on doing our jobs. We need to contain the quarterback as much as we can.”

“They’ve got great firepower like they did in ‘18,” said Ferris State head coach Tony Annese. “They have a different style of quarterback. You’re going to see two quarterbacks that can really do unbelievable things with their legs on Saturday night. Their running backs are the same ones, both are 1,000-yard rushers this season. It’s a different system, but it’s still a very explosive system. Their defense is an aggressive attack-style defense. They’re very athletic. It will be a challenge, we have a lot of respect for them.”

Murphy has had a season to remember. Through 13 games, the sophomore defensive end and 2021 GLIAC Defensive Lineman of The Year has tallied 56 tackles, 13.5 sacks, five forced fumbles and one interception, a resume that allowed him to achieve second-team Associated Press All-America status this week.

On the other side of the ball, Hunt-Thompson emerged as one of the team’s most dynamic offensive weapons this season. Hunt-Thompson has totaled 13 passes for 333 yards — good for 25.6 yards per catch — to go along with six touchdown catches and two rushing touchdowns despite missing five games due to injury.

For Murphy, winning the championship and celebrating with the Dowagiac community would set a positive example for the youth.

“I’m a small-town guy,” Murphy said. “Just being able to do something that a lot of people don’t get to accomplish when we get out of high school would be great. I didn’t get to finish my high school football career the way I wanted to. Tyrese got close [to a state championship] and I got close, but things didn’t work out for us. I think for both of us, it would be really cool to be able to bring something like that back home and just show that we can all do it.”