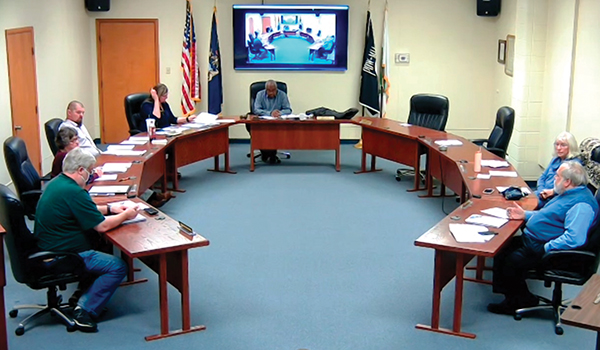 Thursday evening, the Cass County Board of Commissioners heard a presentation from Intersect Studio, based out of Kalamazoo, regarding plans to renovate the Cass County Historic Courthouse and give it a new purpose.

In April, the commissioners voted to engage Intersect Studio for services regarding the Cass County Historic Courthouse building to assist with an evaluation, programming, planning, cost and options analysis. Throughout the process, the design company created a plan to utilize the historic courthouse as a county administration building, which would house essential county services such as Veteran’s Affairs, administration offices, the clerk’s office and more, while embracing the history of the building, according to Deputy County Administrator Matthew Newton.

“[Determining a path forward for the courthouse] has been a long process that has been going on for many, many years,” Newton said. “It’s exciting to see these developments coming forward.”

A final proposal is expected to come before the board of commissioners in the new year. After that, County Administrator Jeff Carmen said the project would enter “phase two,” in which county officials would determine a path forward for funding the project, which is estimated to cost a total of $5 to $6 million. Carmen said the county has several possible funding avenues, including grants, private developers or bonds, to name a few.

Building plans did not end with the historic courthouse Thursday.

Chanda Hillman, executive director of Tri-County Head Start, an organization that provides education and wrap-around services to children 0-5 years old and their families in Berrien, Cass and Van Buren counties to prepare the child and their family for the transition to kindergarten, presented to the board of commissioners to express interest in placing a new Cass County facility in the courthouse annex.

Carmen said he was excited by plans for both the courthouse building and Tri-County’s future in the annex.

“I’m very excited,” he said. “It has been 15 years coming, and we have figured it out. When combined with the possibility of Tri-County Head Start occupying the annex, it is exciting for both government purpose and for providing childcare to everyone in the county.”

The salary increases were recommended by an ad-hoc salary committee comprised of commissioners Skip Dyes, Michael Grice and Ryan Laylin. Laylin said the new salary numbers were determined by taking a median income of similar positions from five surrounding counties.

“There were comments of previous years being underpaid and these positions being underpaid for many years,” Laylin said when answering questions regarding the increases. “These are still just on the high side of the median, believe it or not.”

“Cass County continues to need regional and state support and resources in our sustained response to COVID-19 and emerging variants,” wrote Emergency Manager David Smith in a letter supporting the extension. “Extending the local state of emergency also assists the Van Buren/Cass County District Health Department when issuing public health orders and recommendations that align with the local state of emergency.”